Charlotte of the Cross

It's that time of year.

The days are quickly getting shorter and I rush home everyday trying to beat the sun going down.

It's so hard to get up in darkness, go to work all day and then drive home in the dark.

The last few days, after getting home, I have sat on my back stoop in the last light, taking in the fragrance of Osmanthus fragrans (Sweet Osmanthus, 木樨). It's full of little ivory blooms and its scent is floating around my yard. The warm evenings carrying it's perfume on the wind. You never know when you will encounter a cloud of its heavenly perfume, but it stops you in your tracks. 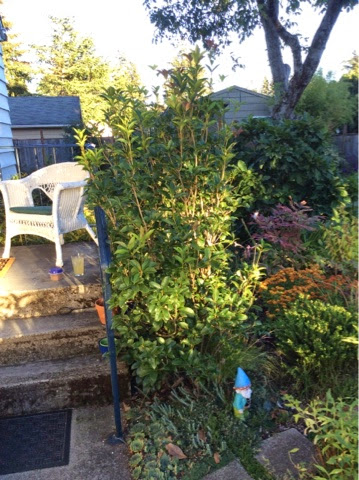 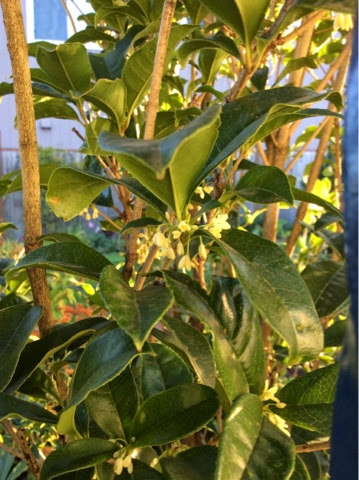 I knew that smell in a past life. I know it's weird but while visiting the Ming Tomb in China - I knew this smell and knew I had been there before. It was a déjà vu moment.

As I contemplate my former past life as a Chinese official, I sip a bourbon and coke and eat cheddar cheese Pringles (they had those in the Ming dynasty right?). Now and then I slip a Pringle nibble to my assistant, Yvette.

My other thoughts are of "Charlotte".

This is also that time of year when the European Cross spiders suddenly get gigantic! Charlotte has decided to make a web between my house and the Caesalpinia gilliesii (Bird of Paradise Bush) I just put in this year. Last year's was rude and decided to die on me... The Caesalpinia, not the spider....

I have been feeding Charlotte in the evenings, not that she needs any help. She gets a snack after my assistant Yvette gets her kibble and I feed the goldfish. But unlike opening a can of K-9 'Brats n Tots', I have to go forage in nooks and crannies for bugs.

For she (Charlotte, not Yvette) loves a good grasshopper or sometimes a beetle, that I find under the wood boards out in the veggie garden. It takes a little effort to scrounge insect appetizers.

Tonight I couldn't find Charlotte in her web. I thought perhaps she moved on to better digs. But when I went to plant something, I discovered where she went . 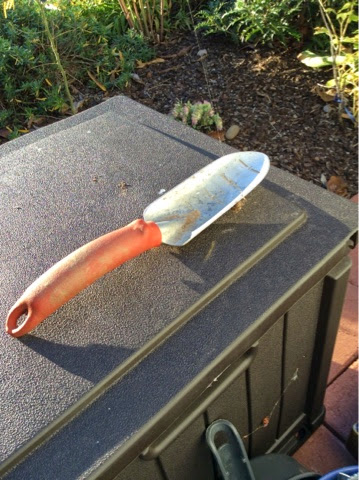 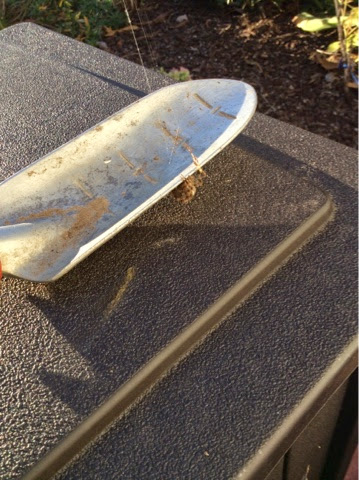 I found a little bug and stuck it in her web. She got all the signals and zipped up her web for a look-see. After a little taste test and wrap-job, she decided she wanted her snack "to go" and brought it down from the web to her new hiding place under the trowel. 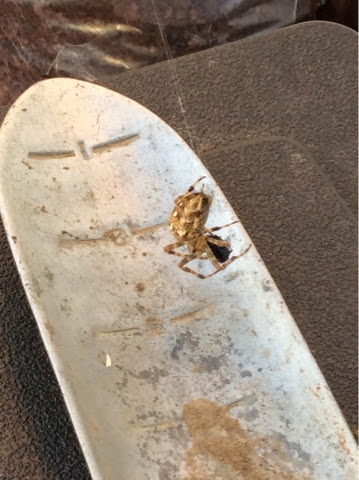 I hope she sticks around for awhile longer - the first frosts are surely around the corner. I will give her treats as long as I can. Hopefully next year's baby spiders will be hers.
Something to look forward to next year.

Is that "Circle of Life" I hear playing softly in the background?

Posted by Matthew - The Lents Farmer at 6:52 PM