This post is a bit of a departure from gardens and plants, but before I left New Orleans, I helped prepare my first Louisiana crayfish boil.

Our gracious hostess Alison showed me the ropes. She was born and raised in New Orleans and was more than happy to put me to work. I had the best time helping too.

Now first be sure you say "craw-fish" and not "cray-fish". As a northerner, I'm used to saying cray-fish, which will have the locals laughing at you.

The morning of the boil, we went to the wholesale grocer and bought two net bags of live crawfish, nearly 60 pounds total or basically 2-3 pounds per person.


The cleaning process involved a garden house, a cooler and the curb. We placed one of the net bags in a cooler and then hosed down one bag at a time until the water was mostly clear. Add water, shake bag, pour out dirty water. Wash, rinse, repeat.

When the water was mostly clear, the bag was cut open and the rinsing/dumping/changing of the water continued. You can never have clean enough crawfish apparently.

I did accidentally dump a few out into the curb when I tipped over the cooler to pour the water out and had to retrieve some of them. I'm sure they thought they were going to make a break for freedom.

Remember when picking up a crawfish to grab it behind its head and out of reach of the claws or it will get you!

You also want to make sure while rinsing, that you pull out any of the dead ones. If their tails are straight - they're dead. You don't want to cook the dead ones either.

At this point, it is mission critical to have a beer (or a delicious frozen daiquiri) in hand, if you haven't already.

I'm a little fuzzy on the cooking times. Not because I was responsibly enjoying a delicious adult beverage, but because I was still washing the second bag of crawfish at the curb and not paying attention to what was going on.

It takes a while to get the huge pot of water to a boil. Once the pot was hot enough, we boiled the spices a few minutes and gave them a good stir.

Then the inner basket with the veggies (onion, celery, potatoes, mushrooms, Brussels sprouts) and aromatics went in.

We used a wooden paddle to stir the pot and also used the paddle's handle to raise the inner basket out as it's hot and heavy.

The crawfish get added to the wire basket and get boiled for about 5 minutes. Then the burner gets turned down and the crawfish soak in the liquid for 20-30 minutes. The flavor comes mostly from the soak and you don't want to overcook the crawfish by boiling them too much.

At a point we tested the crawfish and some of the veggies for done-ness and flavor. All yummy!

To serve them, just pour into big trays set out in a big table. Have some other empty trays for the shells and a lot of napkins at the ready. Don't forget to get another beer!

To eat the crawfish, you pull the tail from the head, peel back the shell part and eat the tail meat. Don't forget to suck the head part noisily to get all the goo out.

I didn't suck the head parts like my neighbors, I was too squeamish, but was sure to say I did when asked!

"oh yeah, that was some good head" (snicker, snicker)


Houmas House Plantation & Gardens is a beautiful historic plantation in Darrow, LA, on the Mississippi River. See the link above for history and more information.

The plantation was established in the 1700's and the house was completed in 1840.


Once known as "The Sugar Palace" it at one time farmed tens of thousands of acres of sugarcane and was the largest sugar producer in the country. As was the time, the labor was provided by slaves.

The Greek revival mansion has been completely restored. The furnishings are of the period, but not original.

The property has changed hands many times over the years. The current owner has restored and enhanced both the mansion and the gardens.

The oak trees out front used to go all the way to the Mississippi River. Now the levee cuts off the view and many of the oaks were removed to make way for progress.

There are restaurants, a bar, a gift shop and an inn on site also.

The gardens are varied. There is an area of desert plants, a Japanese tea pavilion above a waterfall, a kitchen garden, ponds and vast expanses of lawn and old oaks.

It was well worth the entrance fee to visit the gardens. 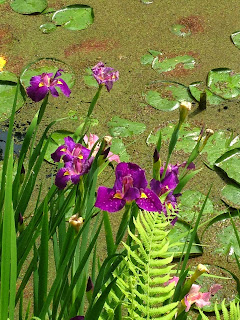 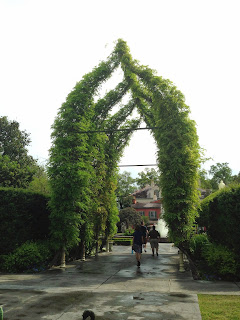 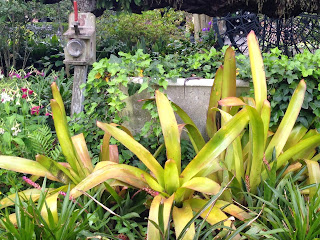 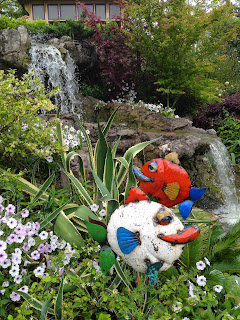 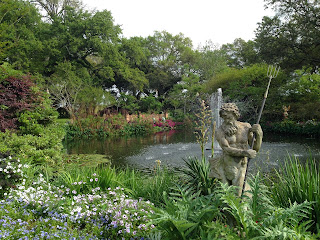 This year I had to choose between a rock and a hard place. My annual pilgrimage to Adleman's and the Oregon Plant Blogger's Spring Plant Swap.

They were both on the same day and since it was the only day Alan could go to Adleman's, I'm afraid peonies won out. The trip is an all day affair, so there was no option of doing both.

With my trusty companions, Alan and Anita, we set out to do some damage to our wallets.

Alan is new to peonies. He bought four last year at Adleman's and this year he had no trouble picking out a few more, including an intersectional. He's been pretty excited about last year's plants blooming this spring in his garden for the first time.

Anita wanted to buy a tree peony this year (but ended up with a beautiful intersectional named 'Unique'), several herbaceous for herself, and a herbaceous peony ('Leslie Peck') for her mom.

I went with buying three herbaceous peonies in mind, but of course ended up with EIGHT. I forgot to buy their fertilizer while I was there though! Doh!


The car was so packed with peonies that I couldn't see out the back of the car. If we had bought one more, there would have been peonies strapped to the roof of the car.
After our stop at Adleman's, we went to Brooks Gardens Peonies to look at potted peony plants and for a look-see around their display gardens.

On the way back, we hit Al's in Woodburn and Hughes Water Gardens for water lily fertilizer tabs, pond plants and tadpoles.

By the time we left our last stop, there was no more room for plants. Everybody had a flat of plants on their lap and there were several bags of baby amphibians being looked after.

All in all an excellent day!

Some of my new flowers are below!