The Garden of Argyle

My trusty partner in crime, Alan, of mardigrasgardener and I hopped in the car and drove to Dundee, Oregon to visit Argyle, one of my favorite wineries.

I had not been to Argyle for about a year and was unaware of the many changes there. Alan had seen the new garden in it's infancy last year and was eager to see it this summer.

I'm afraid that this post will be light on plant names and will ramble a little, as plantings are not marked and I have the memory of a peanut, when I'm bombarded with so many lovely things to look at. 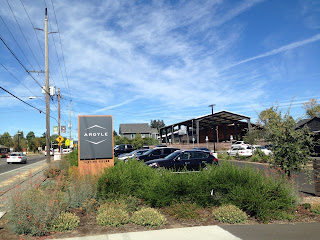 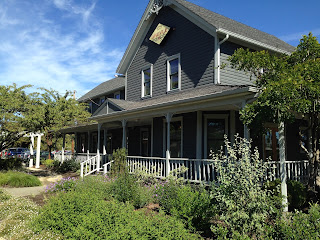 Several of the buildings have been re-purposed and the traditional garden that used to circle the old tasting room has been removed. A few plants like the old wisteria off the back porch, a crabapple? and a Ginkgo in the front yard stayed. The old camellias and such that were no longer wanted were donated to other sites in the area to be reused in the landscape. The previous garden plants consumed too much water.

The new gardens were designed and created by Sean Hogan of Cistus Design and Nursery.

Many gardeners in Portland salivate at the mere mention of Cistus Nursery and all the plant delights they sell at their retail location out on Sauvie Island.

There were two garden tours on Sunday and Sean, some of the workers responsible for the installation of the plants, and Cathy Martin, the Marketing Coordinator for Argyle were present to answer questions and tell the story of this new garden.

The garden is about a year old and was planted during some of the hottest summer weather. They had a hard time getting certain plants watered enough in the beginning and a few plants had to be replanted. Clearly many of the plants have now settled into their new home and were beginning to take off.

The gist of the new garden design was to be as water responsible as possible and also to contain plants particularly adapted to grow here, native or otherwise. Plants that could withstand low water but also wouldn't mind a occasional drink to keep looking good for garden visitors were chosen. While still being water conscious, some areas closer to the house would receive a little more water and then areas father away to support a diversity of plants in the garden. Also important was the garden's ability to draw people in and let them get lost in the paths among the plants. 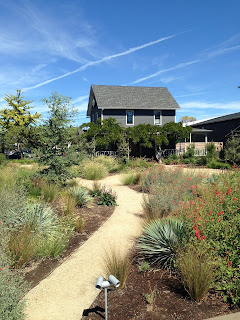 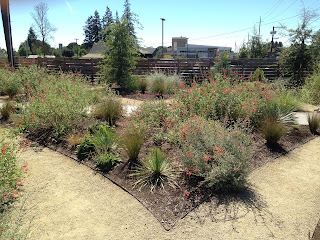 I would call the color palate of the garden very restrained. Lots of gray, silver, blue-green with a hint of gold and white here and there. Pops of color came from flowers such as orange Zauschneria, red Salvia darcyi, white Cistus and purple Lobelia siphilitica.

Various Oaks from around the world, Manzanita (over 300!), Daphne, and Ceanothus are included.

Next to the tasting room was a grass "lawn" of native Carex. This same Carex was repeated throughout the garden. There was a diversity of grasses used in the design, the day's most eye catching being Bouteloua gracilis (Grama Grass) and the not quite a grass Rhodocoma capensis (Giant Cape Restio).

A bypass is planned for the city, so the main drag of traffic just beyond the garden will be soon diverted. Walls of quickly growing Ceanothus were planted to help shield the garden from the noise and obscure the view of the street.

There were a few details of the garden design that the city required, such as instillation of bike racks and a bioswale for parking lot run off, but these were relatively easy to accommodate.

There is a test area for Manzanitas and a small area of Olive Trees near the Nut House. 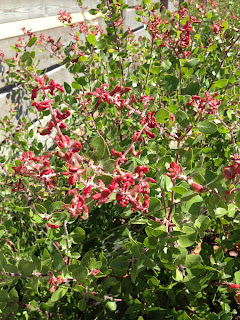 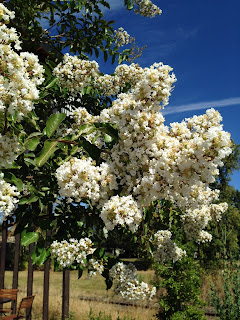 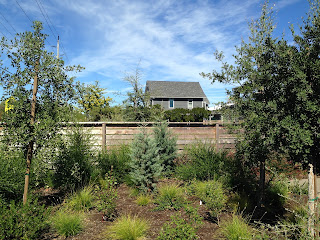 I'm sure I've missed some of the details, but this is a lovely new garden and I look forward to seeing it evolve.


It's not like a need an excuse to visit Argyle, but the garden sure does sweeten the deal!

Please check it out!


There have been some changes in the "ponds" at The Lents Farmer.

This summer, I've upgraded all the sizes of the various horse troughs and all the fish and water lilies have been moved.

Moving fish and water lilies is not too hard, it just takes a few days for new water to be ready for fish. It needs enough time to sit so that chemicals like chlorine dissipate and the water temperature equalizes.

I usually plan on 4-5 days from filling to moving fish. Water lilies are more forgiving and can be moved a bit more quickly (24 hours later). This is just what I feel to be safe, others may have a different plan. I also prefer to not use aquarium chemicals or water conditioner.

In emptying some of the ponds, I saw how I have not repotted a few of the water lilies for a couple years. When your water has green algae obscuring the bottom, I don't always know what's going on down there!

While moving one stock tank, I had to ask a neighbor to come get dirty and smelly as we tried to lift two lilies that had grown together into a huge mass. It was almost too heavy for us both to lift, but we got it lifted up and over. These two lilies, I have just decided to let go and see what happens. I have had the most flowers on these lilies this season than I have ever had.

This brings me to Nymphaea 'Wanvisa'.

Wanvisa and it's neighbor lily were in a 150 gallon stock tank together. I tried to pull them out to move them but realized they were now one plant and not two!

Their crowns had grown together, but I managed to separate them while still in the water with a clippers and some finagling.

Below shows a few of the steps I went through to repot this lily. It's a little hard to take pictures with dirty hands but you'll get the general idea. I also strongly suggest not dropping your iPhone in the water. Not that I have done that.


It's best to repot lilies every 2-3 years. I clearly haven't repotted this one since I bought it in 2012, as it was still in the original net pot. Bad lily daddy!

The best thing to do is to get all your equipment together and work on a cool spring day in the shade. For tools, I use an old serrated bread knife, scissors, and a hand shears. Sometimes growing crowns will break through a net pot and it requires a good cutting tool to remove the plastic pot without hurting the growing lily crown.

Also good to have your new soil and fertilizer tablets ready, and the gravel washed for top dressing the pot. You want to work fast to not dry out the water lily.


I started by removing all the fine roots protruding from the net pot and gently worked the four growing crowns out of the pot. Since most of the new roots were free from the old pot, I used my hand sheers to cut the crowns free. What was left in the old net pot gets composted.

Now's a good time to pull off any remaining dead leaves or flowers from your divisions.

I prefer to use my vegetable garden soil for repotting since it is readily available and good soil. I do however try to get soil that hasn't been amended with peat moss or grass clippings (they both float and will make a mess).

I prefer to use a plastic pot with drain holes in the bottom and not a net pot. In this case, I just grabbed what I had on hand.

I use a few sheets of paper towel to block the holes in the bottom of the pot. This keeps the soil in long enough to sink the pot back in the pond. The paper towel eventually disappears.

Place a couple PondTabs fertilizer tablets in the pot before filling up with dirt, just tuck them in the first handfuls of dirt and put the lily crowns on top.

Be sure to not cover the growing crowns or bury them in the soil, they should be sticking up and out of the gravel. The crowns will eventually grow across the top with new roots growing down into the pot.

I like to use a natural stone that's larger than pea gravel. The big comet goldfish can pick up pea gravel and spit it out elsewhere, so a larger gravel prevents this. Fish can also get small gravel caught in their mouth.

When it's time to put your newly potted plants back in the water, be sure to take it slow. As they are lowered, they will bubble and spit as the air gets worked out of the pot and you don't want to make a mess of the water.

Here are some other gratuitous pictures of other water lilies this season.