Summer sort of flew by in a blur this year.

I was hoping summer would take my mind off my father's passing in April. At least I would have gardening, fish and flowers to occupy my brain for a while. 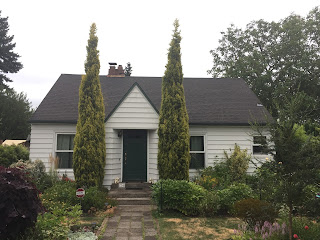 I hosted the Portland Blogger's spring plant exchange May 7th. It was a good excuse to get the garden looking good. One of the best parts of gardening is sharing your garden with others. But having 22 plant aficionados in your garden is still a little intimidating.

In June, I took my work pal Anita to the open house of Sarracenia Northwest and bought way too many carnivorous plants. I do love my bogs now and can see how this could evolve into "a thing". My Venus Flytraps, Darlingtonia, Sarracenia and Sundews all bloomed and were adorable all summer. I worried about killing the Darlingtonia constantly, but it put out a lot of new runners, so I think I made it happy. 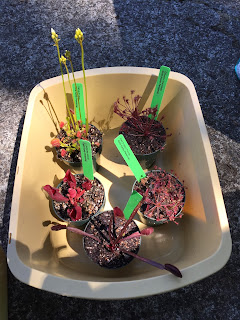 Most of June and July went by like a breeze. I swear I only remember preparing for the unusual amount of hot weather we had this summer. There were several episodes of really hot weather too.

The first hot spell was several days of 105 degrees. This takes a toll on plants, the lawn, the fish and my water bill. Seems like I spent the last few months watering constantly and not doing much else. Thankfully, I have a routine for placing out my sprinklers and following up with hand watering here and there.

While I appreciate the convenience of the sprinklers, I really feel like I lose touch with the plants when I'm not really spending time in the garden fussing.

With the heat, I also had to worry about the ponds and fish. Four of my fishy babies didn't make it through the first round of hot weather. But considering there are probably 100 fish in total, my losses were very minimal. For the second hot spell, I spent a lot of time out in the heat trying to keep fish cool with a combination of shade cloth and daily water changes.


This summer was the first that the ponds were not repeatedly ransacked by raccoons, so the water lilies looked amazing all summer. My ugly surrounds of chicken wire finally kept the raccoons at bay. With the exception of one hot tubing lily leaf pooping opossum, the ponds were pest free all summer. 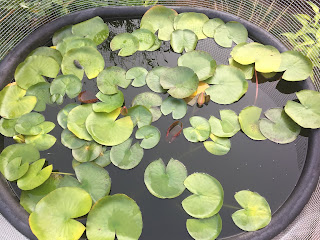 Assistant Yvette and I watched the August eclipse from the garden. While we could have gone south to see it in totality, I was really content to just be at home with her. I watered flowers out front while wearing my glasses, occasionally looking up at the sky to see what was happening. Miss Yvee camped out on the back porch with not a care in the world. 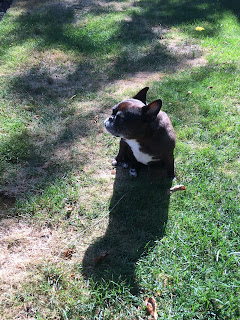 My only real complaint this season, was that in late August/early September something happened that has never happened before! FLEAS! OMG FLEAS!

I have never even seen a flea in 11 years of gardening at The Lents Farmer and they popped up suddenly and in huge numbers. I could walk barefoot in the grass and 10 fleas would jump on my feet. I could not even walk to the back to feed the fish before work without having to pick fleas off my pants. So gross! My "flea paranoia" got pretty bad as did the bites on my ankles.

I sent Assistant Yvette to live with her other parent, so that I could try to get a handle on the yard fleas. I didn't want her to suffer and I didn't want fleas in the house too.

Other then watering the lawn and mulching the grass most of summer, no other changes happened to the garden. So I'm not sure why the fleas popped up so suddenly?

I am still battling the fleas.

I started out with biological treatments and as they invaded my garden, then progressively began using harsher solutions to try to combat them. They will die soon when the weather gets colder thankfully. I will try Nematodes (Steinerma carpocapsae) in the spring that specifically enjoy killing fleas. I would try applying them now, but I'm afraid some of the harsher flea treatments, might kill them too.

So here's to looking forward to Fall. Autumn begins today!

Below is a potpourri of random pictures from this summer: