Here we are only at the end of January and it seems so much is already happening in the garden.

Since winter has been almost nonexistent, I've already got a lot of my fall leaf/spring plant cleanup done and I've been mulling over what my projects are for this year.

I've walked around the garden a lot trying to have a critical eye, looking at everything. There are some areas and even an entire flowerbed that I just don't think ever came together and might need to be re-thought.

I've also noticed a few plants that I clearly planted in the wrong spot. Case in point is the Pinus contorta 'Chief Joseph' that was planted in 2011.


Gardeners go crazy for this pine tree because of its golden-yellow winter color and its ability to shine in the winter landscape. In summer, the foliage turns to a medium green. It's slow growing to maybe 8' tall. This tree also causes "sticker shock" when you see how expensive they are. I bought a tiny little guy in 2011. I don't remember what I paid, but at the nursery it would be easy to drop $100 for a decent sized specimen.

For whatever reason at the time, I though Chief Joseph would be nice near the kitchen door planted between a tiny Hakea lissosperma (Mountain Needle Bush) and a Vaccinium ovatum 'Thunderbird' and behind a Magnolia.

Silly me, I thought that the Hakea would not live to be 10' tall and be able to poke me every time I tried to get in my back door!!!  Apparently "Mountain Needle Bush" wasn't enough of a clue to me of its ability to cause pain. I probably should have moved the Hakea, but I wasn't going to deal with that!

The recent winter winds helped me out by pulling out the rickety bamboo pole I used to stake the Hakea up and it was consequently now leaning away from Chief Joseph. What a great opportunity to relocate it without needing chain-mail body armor.

I kept offering to give Chief Joseph away to Alan if he would help dig it out. He gave me some lame excuse about not having room for it in his garden.

On a recent tour of the garden to show Alan what was popping up, he suggested I dig out a new bed along the long side of the side garden. The light bulb went on. Create a bed extension with a stepping stone walkway and Chief Joseph would be the star! 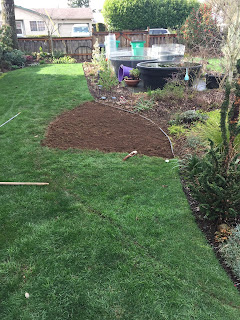 It didn't take me long to get out there and start digging sod. I was very proud of myself to not over do it with the digging. Younger me, would have dug the entire bed, installed the edging, transferred existing plants, gone to the store to buy new plants and then bark mulched everything.

This time, I got about half way done digging sod and whacking off as much dirt as possible, which was heavy and damp, to throw in the yard debris bin and then stopped.

I concede that I had to at least dig and relocate the pine tree into it's new home and get it watered in, just to see what it would be like.

The next step will be to dig the other half of the sod from the preliminarily outline and then go back and refine the shape and get the edging in. The final bed will probably end up bigger than what I outlined, but there is nothing wrong with that.

The plus side is that there will now be room for a new peony or two!
Posted by Matthew - The Lents Farmer at 1:51 PM 3 comments:

Two great gardening people that I am happy to call my friends, Paul Bonine and Amy Campion, have written a book together called: "Gardening in the Pacific Northwest - The Complete Homeowner's Guide". 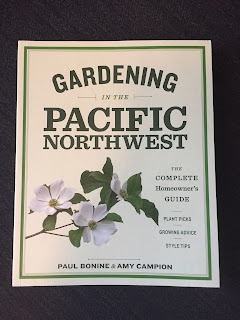 It's a guide of what sort of trees, shrubs and perennials to plant in the Pacific Northwest with a focus on specific plants that do well in our various climates. There is also useful information on how to deal with various soils, pests and other gardening problems in the Pacific NW.

Additionally, Paul and Amy are giving a talk on Sunday, January 21, 2018 at Portland State University Hoffman Hall at 1pm (doors open at noon).

They will be talking about the latest trends in Pacific NW gardening and what plants work best. The plant knowledge Paul and Amy have is amazing, so this event should not be missed.

Cost for HPSO members is $10 and non-members $20. Registration is required. (Go HERE http://www.hardyplantsociety.org/index.php?option=com_mc&view=mc&mcid=72&eventId=536125&orgId=hpso&recurringId=0 for registration details).