What's a man to do after he's succumbed to online plant buying temptation and ended up with 42 bare root Sarracenias?

Pot them in the bathtub of course!

This post will lack a little in the pictures department, as I clearly wasn't thinking of taking photos when I did all this.

It all started when Sarracenia Northwest sent me an email regarding a early spring bargain sale on bare root Sarracenia.

Being a bargain and all, and knowing that I would give a bunch away to Alan of The Mardi Gras Gardener, my coworker Anita, my Portland blogger pals, and my dearest mother in Florida, of course I bought 30.

Of course, I had to order all this during Snowpocalypse 2017. Sarracenia Northwest was kind enough to let me know there would be a delay in shipping, due to said Snowpocalypse, which was totally fine with me.

There was clearly no way I would be potting these guys out in a foot of snow.

I had no idea what I was buying really. I have never divided pitcher plants or seen them unpotted. I had zero concept of how big or small the roots would be?!?

One Monday at work, the box arrived in the mail. I was eager to open it and see what was inside.

The plastic back contained a "wad" of unlabeled roots, so I have no idea what any of them will turn into. There seemed to be quite a variety, however, so I'm sure there will be some cuties.

I texted this picture to Alan. His reaction was "WTF is that?"

I had told him previously that I needed to raid his plastic pot stash as I didn't have 30 pots laying around and I was too cheap to buy new ones.

Thinking ahead, I had already bought three little bags of perlite and there was a bag of peat moss in the shed outside, that just needed to thaw out a little. But I still had to mix the "soil" and that can be dusty and messy.

I placed the babies in a pyrex baking dish with a little water to keep them wet until the weekend when I would have time to pot them up.

Of course the weekend I wanted to pot them, it was raining cats and dogs, so the only reasonable thing I could think of was to mix the soil in the house in a big tote (aka "Big Purp") and pot them carefully in the bathtub. Other gardeners do this too I'm sure. 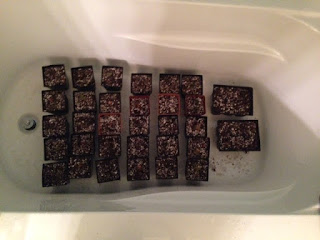 The roots varied in size but most fit easily in a 4" pot. There were some very small varieties that ended up in the 6-packs.

Since the plants had been outside all winter in Eagle Creek, once potted, the plants went back outside sheltered near the house.They would still get rained on and get a little sun.

I will need to figure out water trays for them soon. It's rained everyday since they have been outside, so I haven't worried too much about watering them.

They will take a few years to mature, but how exciting!