I have had the pleasure of going to Paris twice in my life.

The last trip was September 2012 and prior to going one of our beloved Frenchies, Genevieve, went over the rainbow bridge.

It was a very sad time for us, but our vacation to France and Luxemburg was a timely one. We just needed to suck it up and try to have a good time.

We received Ginny's ashes back just before we left. Without telling my now ex, I took some of her ashes in a small container and stuck them in my dittybag and smuggled them into France. (Don't tell anyone!)


After two weeks in Alsace, Luxembourg and Burgundy, we finally arrived in Paris for a few final days.

One night we were out to dinner at Cafe Le Bouledogue, our favorite site for spotting Frenchies in Le Marais, where one of the owner's dogs sat in the corner by the stairs while we ate.  My ex remarked that it was great to be sharing our dinner with a Frenchie.  To which I remarked that we were having dinner with TWO Frenchies. Ginny was in my pocket.

After dinner we went to Notre Dame. In my mind, I knew that I wanted to spread some of Ginny's ashes at Notre Dame, to me the most beautiful cathedral in France.

So that night, a little bit of Genevieve went back to France.

Which brings me to the first blooming of Paris polyphylla in my yard, which I found last year at Cistus.

I foolishly thought it would come up early with the Trilliums, so I kept a close eye out for it. At first I thought it was dead and that made me a little sad. There was not much happening at the marker I kept in the soil as a little headstone for it.

A few weeks ago, I finally noticed a "nubbin" coming out of the ground and I hoped it was Paris polyphylla. 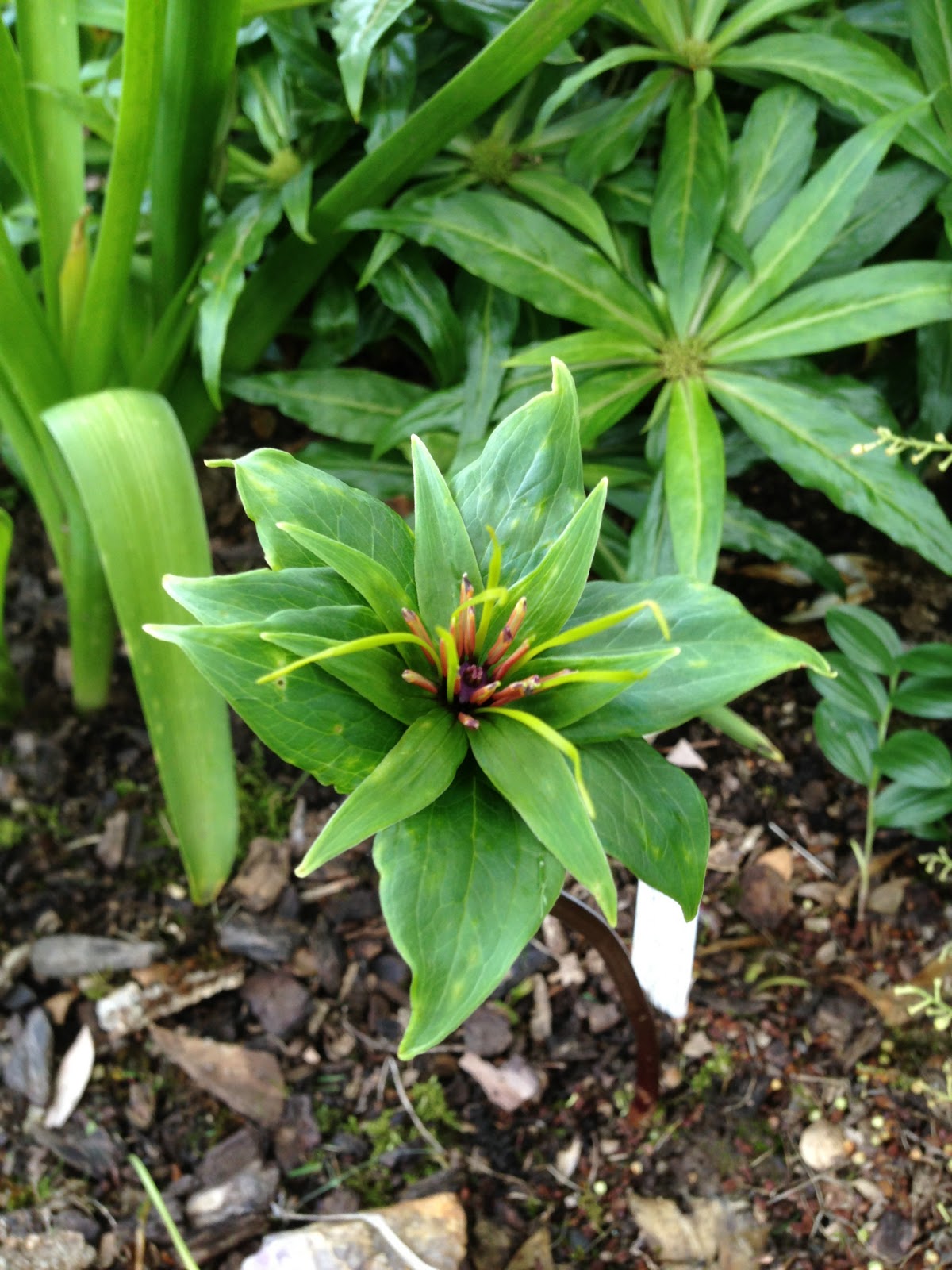 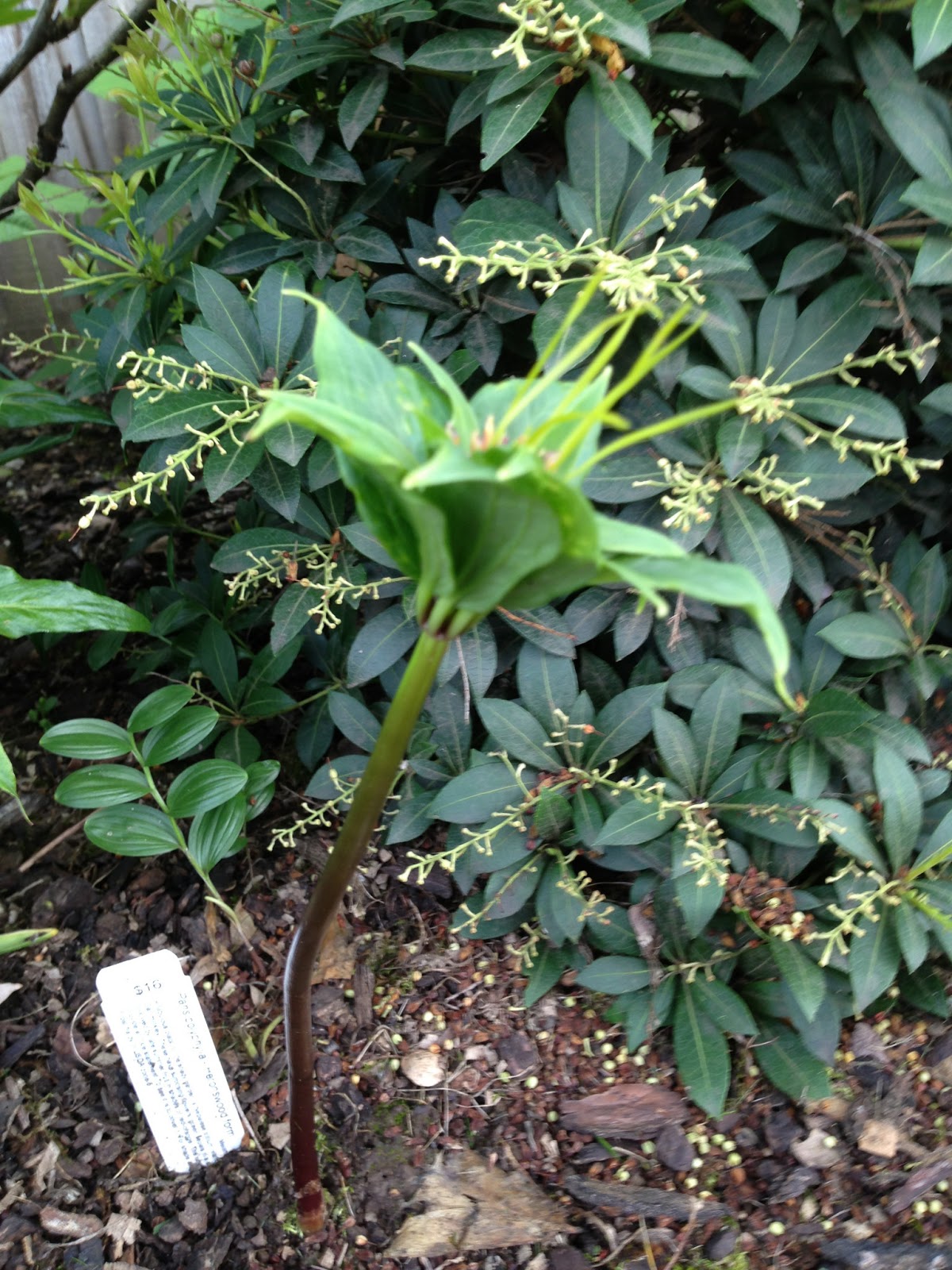 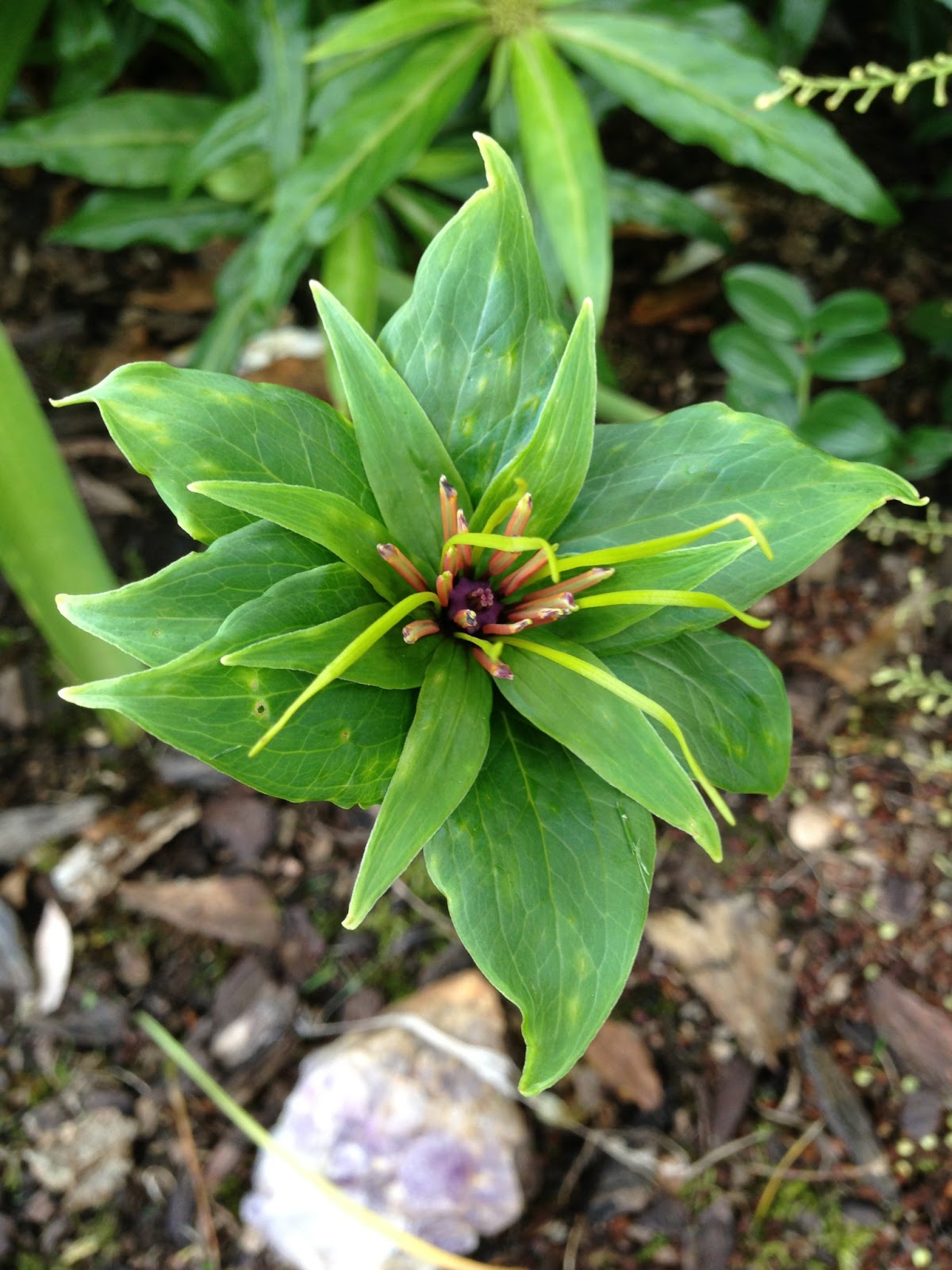 Now it's leaves are beginning to unfurl and the "bloom" is opening. It's such an odd flower.

I hope each year it will come back and will remind me of our beloved dog, Genevieve.

I know it's corny, but plant people are like that...

My Plant of the Day - Embothrium coccineum (Chilean Flame Tree)

Just by the name alone, doesn't it sound exotic and wonderful?

I happened to be at McMenamin’s Edgefield over the weekend and nearly peed down my leg when I saw this Chilean Flame Tree and the hummingbird action it was receiving.   There were only a few flowers down low, but I did finally get to see them up close.

While I do actually have this plant (from Cistus) mine is only about 10" high and going on its second year in the garden. It is going to be quite a few years before the "hummingbird buffet" is open for business.


The Chilean Flame Tree is stunning in late spring/early summer when it covers itself with bright scarlet flowers. An excellent garden plant, evergreen in mild winters, deciduous when the temperatures go into the teens. A slender tree to 25’ eventually in full to part sun, with regular water. Loves cool ground so best in a north aspect and with ground covering plants to protect the roots. No phosphorous fertilizer. Cold hardy to Zone 7b. 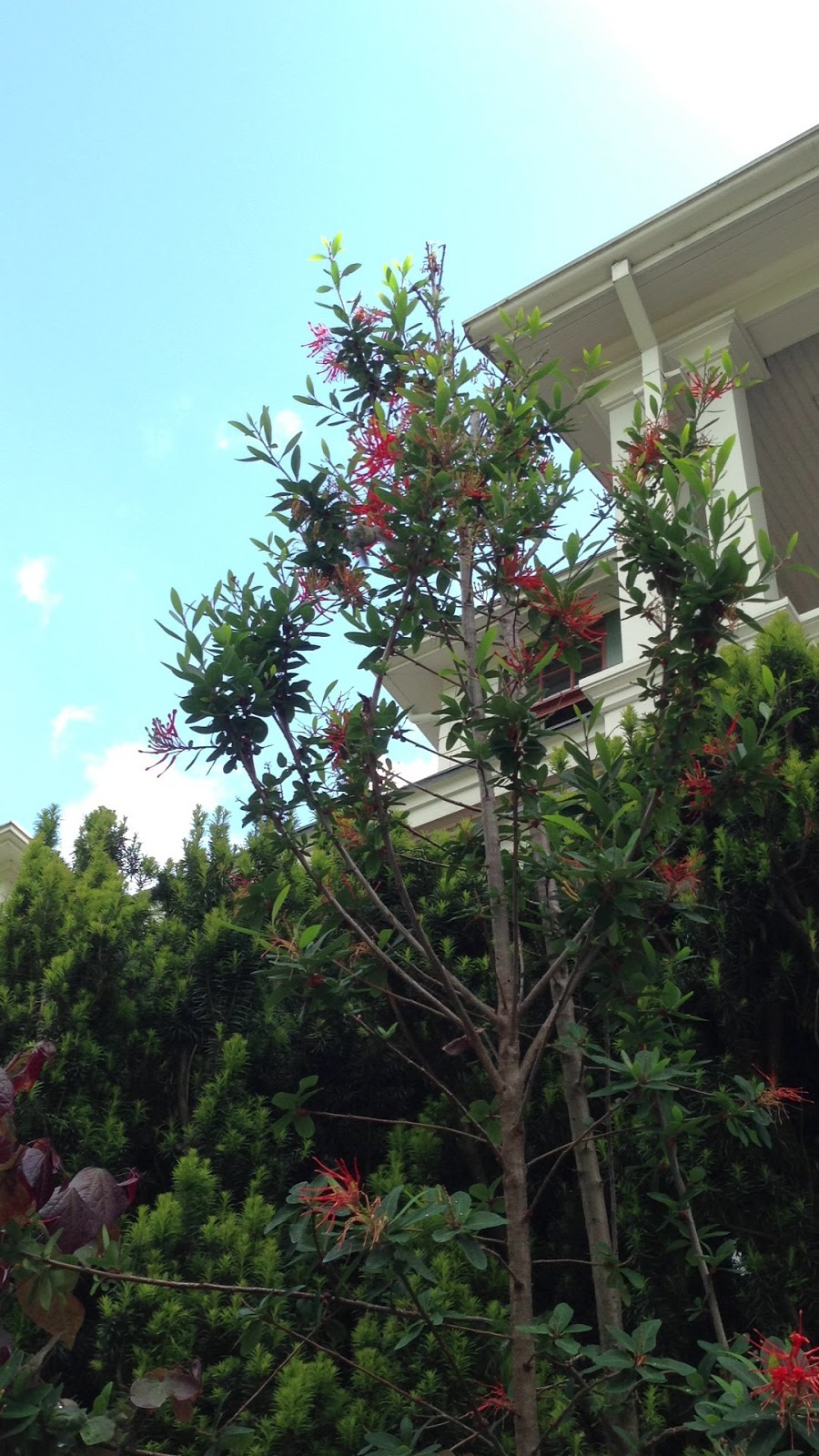 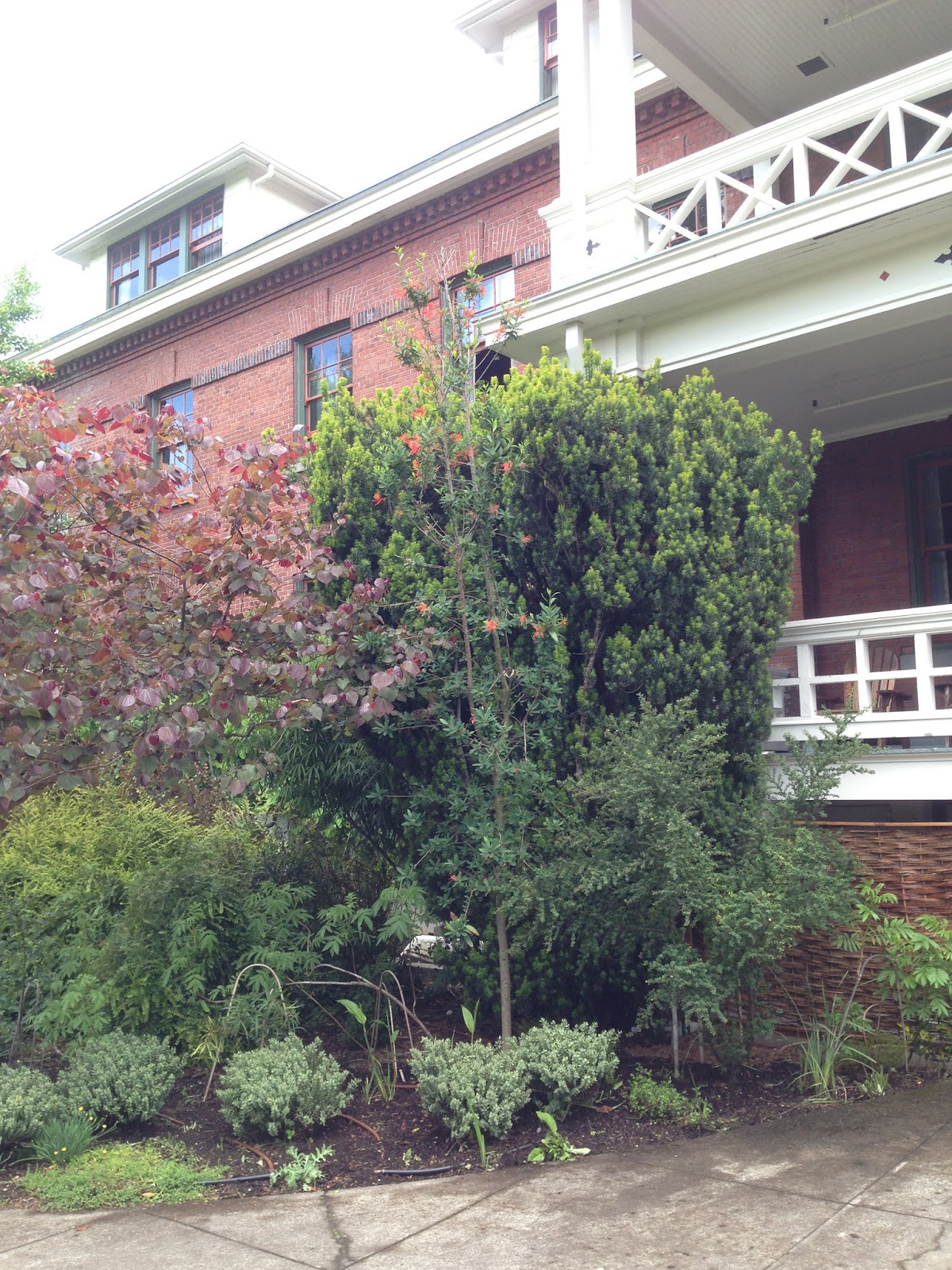 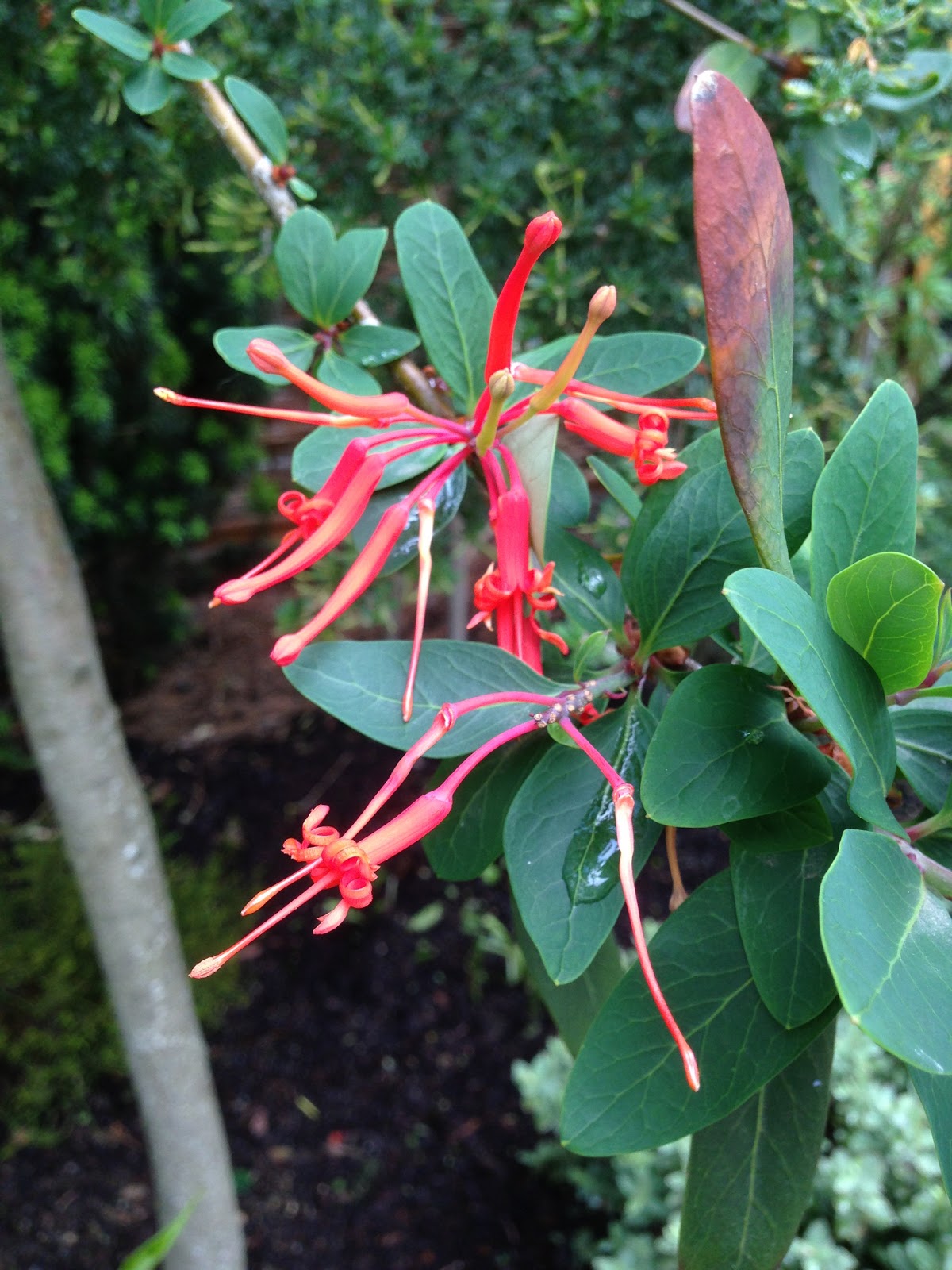 There was also this shrub. I don't know this plant personally, but a plant nerd friend I.D.'d it as possibly an Iochroma ('Empress'?), a solanum from South America. The flowers were white hanging trumpets. It may be on the verge of its range here in Portland and he thought may die back quite a bit in the winter. The hummers seemed to love it too.

Who Knew These Actually Bloom?!?

I work in NW Portland and while walking from my parked car to my favorite burger (Street Car Special @ Nobb Hill) -  I like to take various paths through the hood to see people's yards and flowers.

One day I noticed this little guy. I'm assuming it is a Dracaena (aka Spike Plant).  I don't really know them that well other than they look great in the center of a decorative planter.  I've never grown one as a yard plant, but I think I might have to reconsider them.

I was surprised by the Asparagus-like bloom spike. So I made sure to check back to see him bloom.

There was an added bonus of a cute little Echium friend blooming nearby. 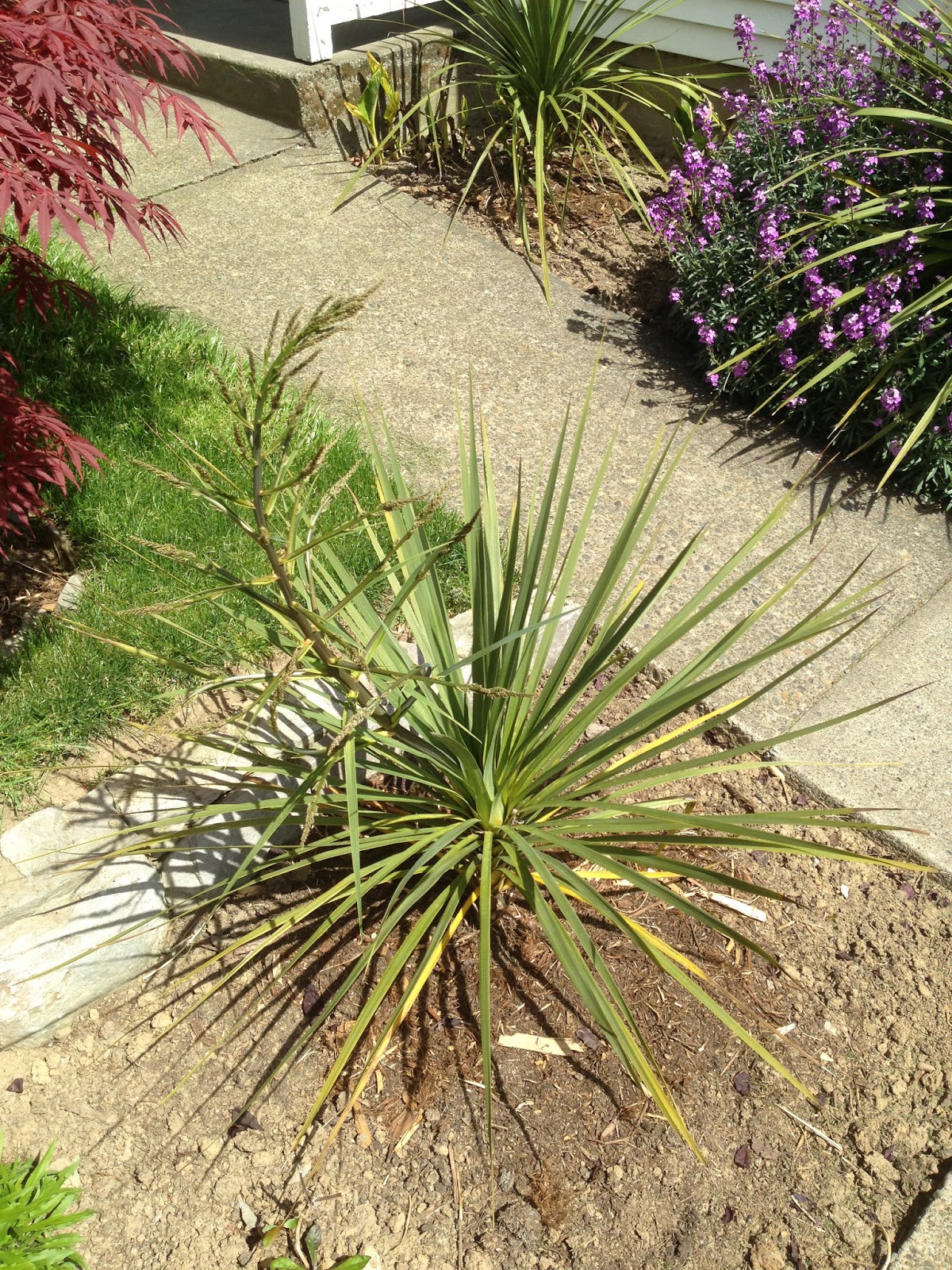 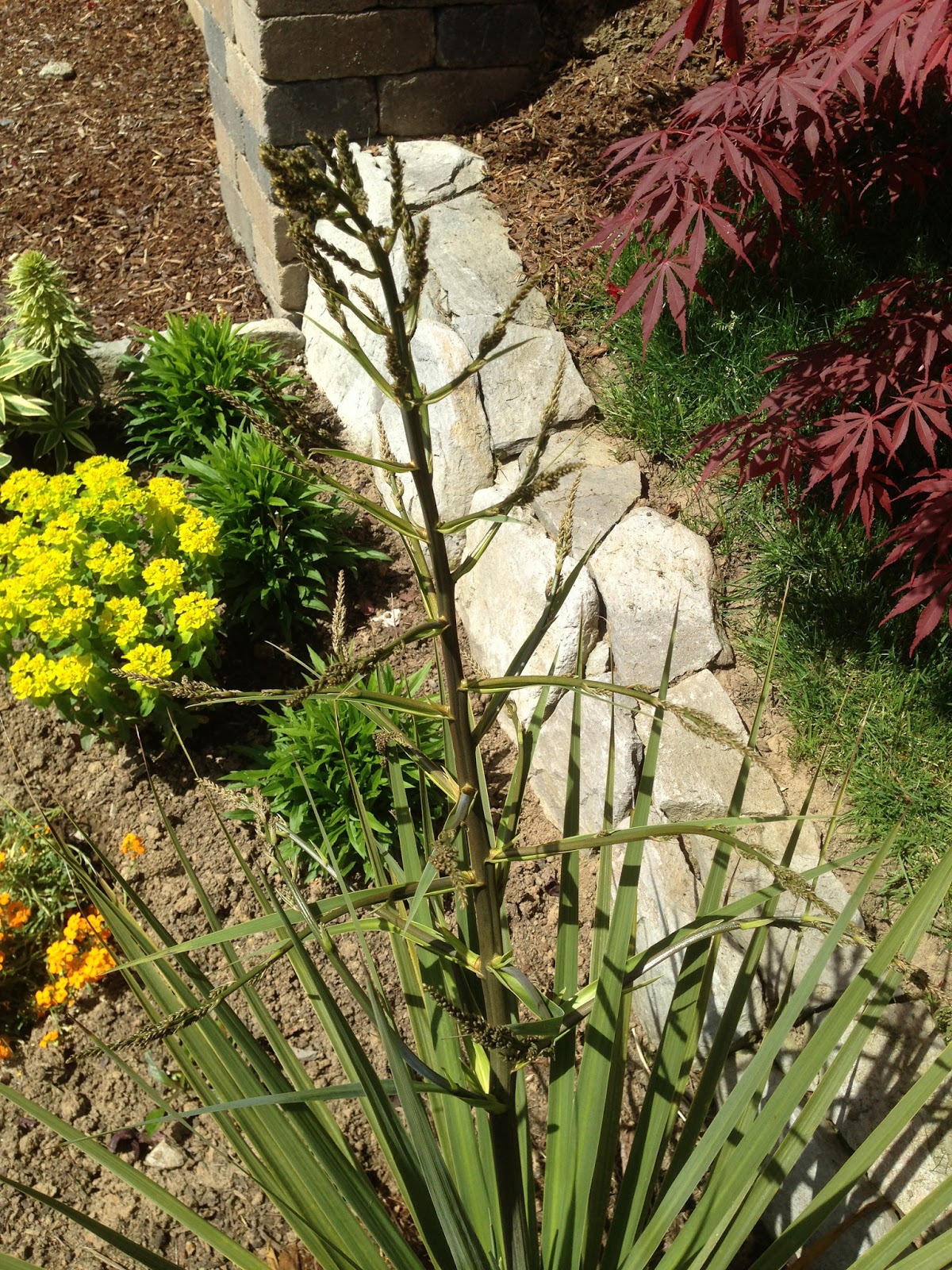 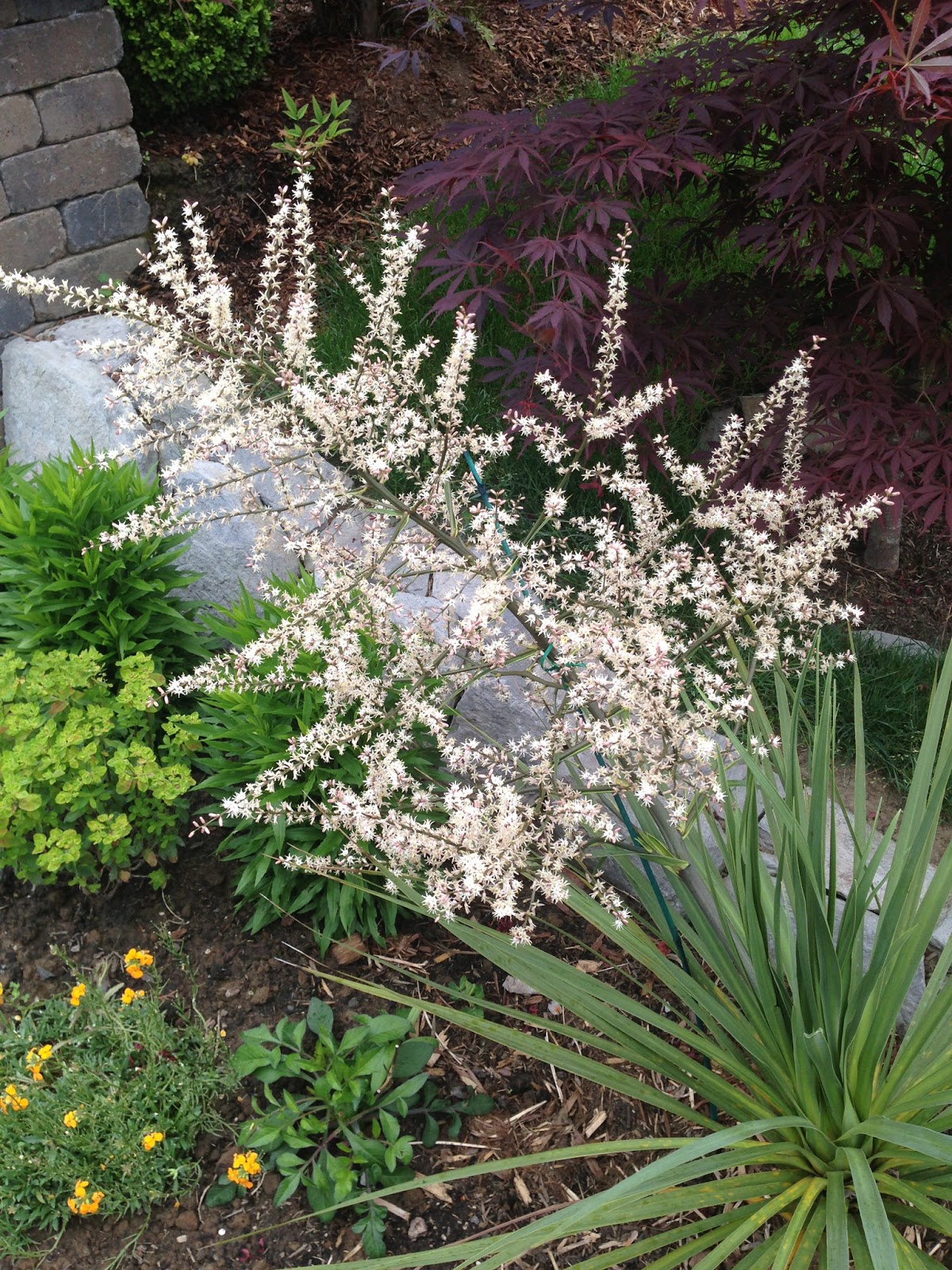 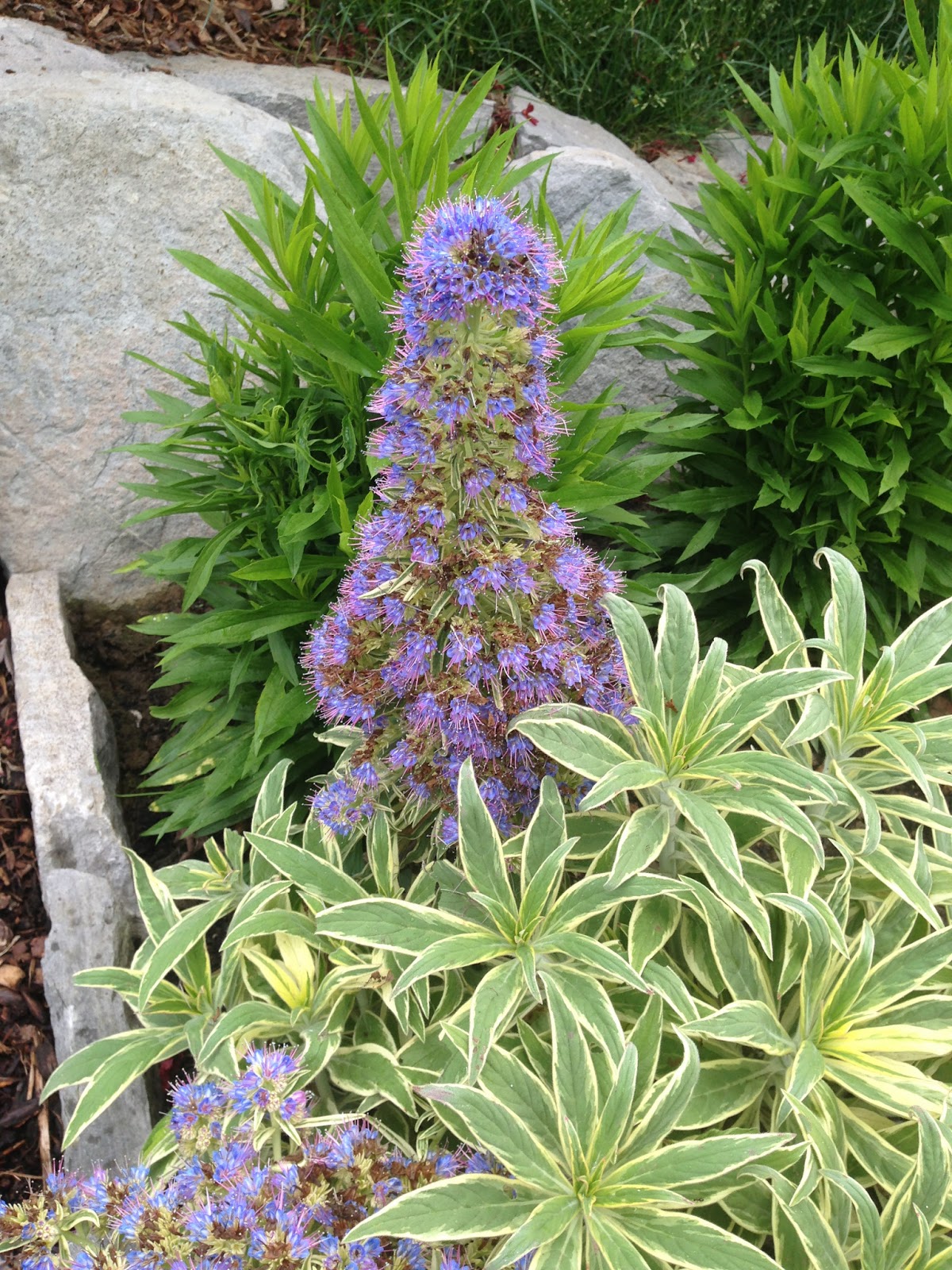 Begonia 'Benitochiba' - Had to Have it!

I'm not really a Begonia person. They make me think of old blue-haired ladies growing them inside on windowsills or in mass planter boxes at theme parks.

I admit that I have a few Wax Begonias in the yard from a 6-pack of annuals I bought years ago. They seem to somehow survive each winter and reappear much to my surprise.  I think they return each year mostly out of spite.

But when I saw this hybrid Begonia 'Benitochiba' I had to have it. I was imagining its pretty metallic coral red leaves with contrasting pewter-grey veins next to my favorite garden "thug" - Sedum repestre 'Angelina' or the much nicer Saxifraga x urbium 'Aureopunctata'. It even looked great in the red wagon. 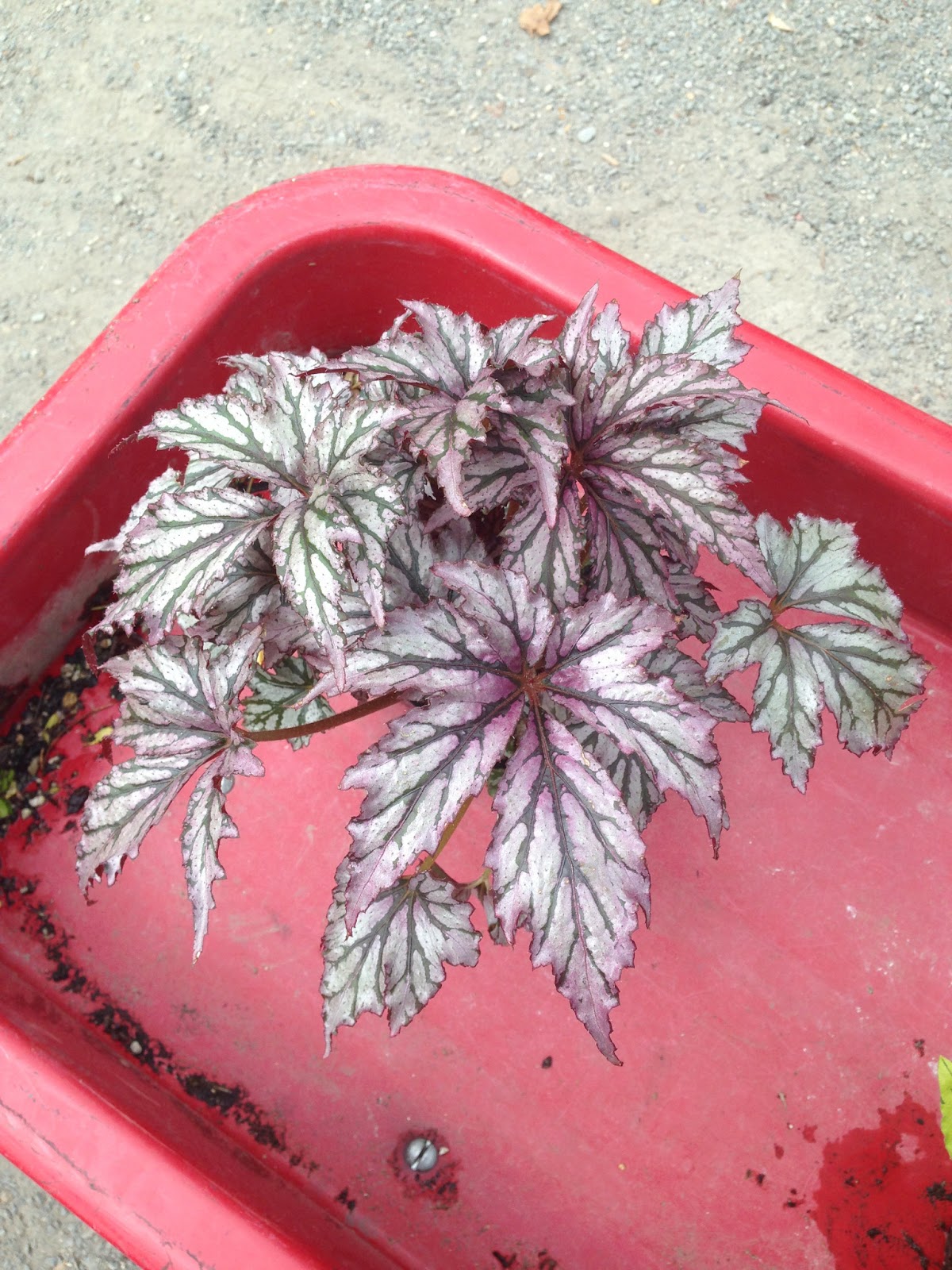 .
I'm sure it will rot over winter and I'm too lazy to bring plants in (except for a couple small Agaves and a Pachypodium in pots).

I know it won't make a repeat appearance just to spite me, unlike the Wax Begonias.
Posted by Matthew - The Lents Farmer at 12:43 PM 3 comments:

Here in Portland we had some cooler rainy weather after a week of sunny mid-80s.

The hot sunny weather the week prior was already burning the lawn and Portlanders were complaining about it being too hot already.  Portlanders are a fickle bunch - How quickly they change their tune!

My newly planted vegetables needed daily watering to make sure they didn't burn up and even the flower beds seemed really dry under the bark mulch.

I had already turned the heat off in the house for the season, but had to turn it back on for the weekend, because I was cold (If only I had cheese to go with my whine).  It was hard to sit inside and watch it drizzle, when I wanted to be out in the garden, but at least I didn't have to water everything.

I couldn't bring myself to go out in the rain to Rare Plant Research for their sale. I knew I could live vicariously through all the other bloggers who went who would  post all about it.

Life is about trade-offs.

All that time I could have been watering in the heat, I spent cleaning house and looking out the window at the beautiful spring rain. 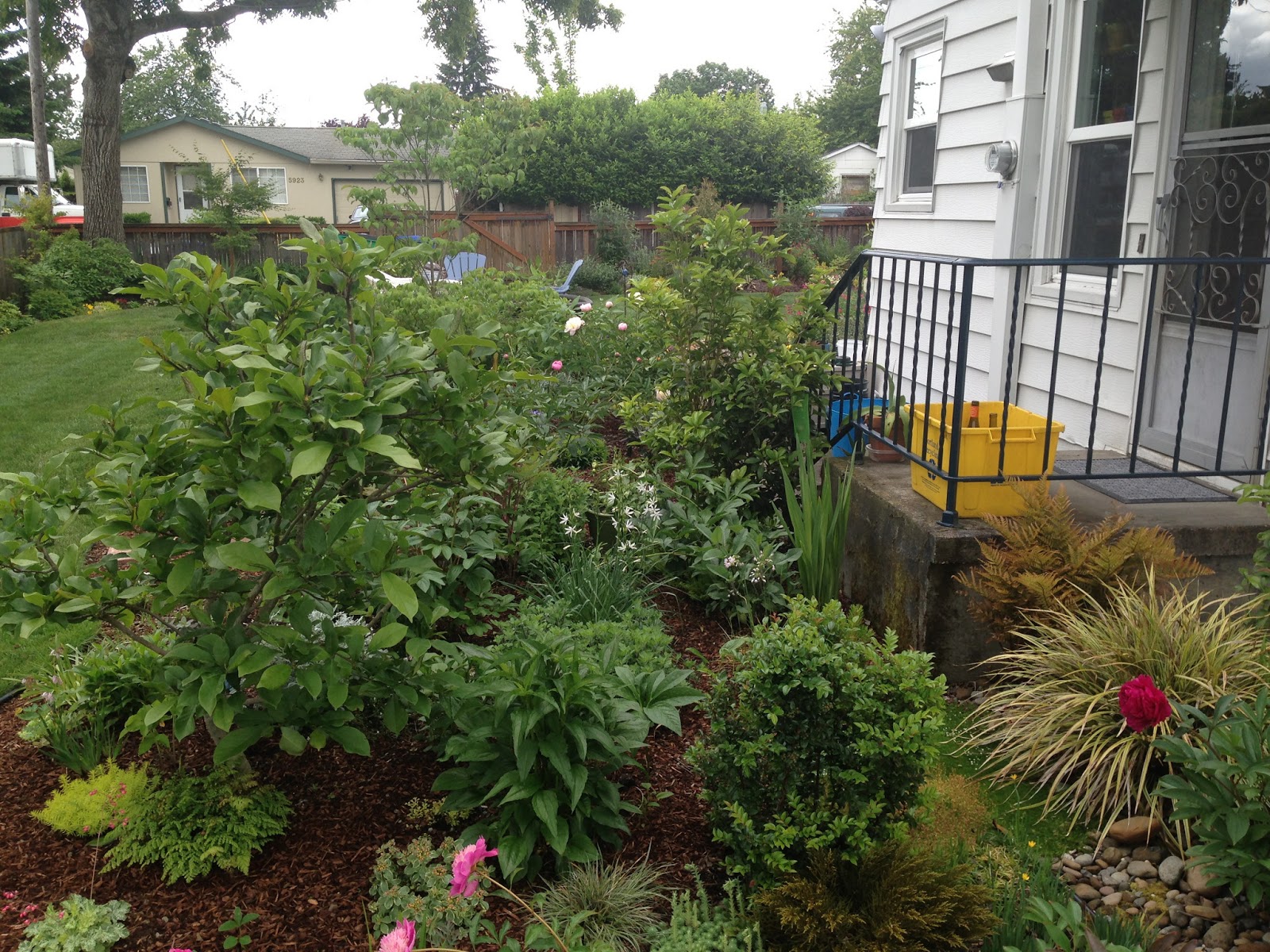 My Flower of the Day - Rhodohypoxis

These are the cutest little things ever!

Here in Portland, Rhodohypoxis emerge a little late in Spring, but their diminutive nature, furry leaves and unique flowers make them really special.

Rhodohypoxis are tuberous rhizomes, with generally bright pink, deep pink or white flowers. The plants only growing to about 3" tall. Be sure to put them in the front of your flower beds.

They seem to like rocky/well-drained soils that retain some moisture but aren't soggy. They are enjoying my Lents soil perfectly.

My groups are slowly but surly spreading into nice little carpets.