It all started a year or two ago.

You notice something that needs to be done, but you just decide it can be put off longer. Then a lot LONGER goes by, much longer than you thought.


I've had this water lily for ten years. I'm pretty confident that I have repotted it a few times since then, except, for the past few years. After the upgrade to a 300 gallon trough a couple years ago, I think I let it slip.

I knew there were three lilies in the trough and over time I thought they'd probably grow together out of their pots and across the bottom and all would be right with the world. Last year, I had more flowers than ever out of these three.

It never occurred to me that one day, a giant mass of water lily would begin floating to the surface and no amount of large rocks on top of the mass would keep it down. I can only surmise that the crowns must have a certain amount of air in them and they finally got to the point where their mass floated the entire pot to the surface. Who knew?!? 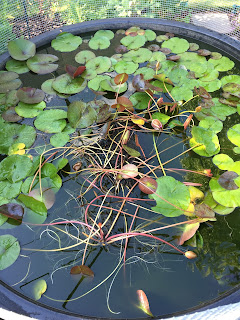 I guess now I finally had to do something about it. I couldn't have exposed growing lily crowns bobbing in and out of the water in the hot 80 degree sun.

So, off to my big box store for supplies: new pots, soil and decorator rock.

In the past, I used my vegetable garden soil for repotting water lilies. This year, just looking at the project at hand, made my back ache, so I opted for a bagged "soil" that was a mix of compost and sand. I read all the labels on the various bags and this seemed like it could work. It will be an experiment to see how the plants do in this soil.

My friend James, offered to help with the hefting out of the water lily and the other menial tasks, so I could concentrate on the lily.

I plunged my arms into the pool and started feeling around. I quickly determined that the other two water lilies (Nigel & Sioux) were only slightly entangled in the mix. My floating problem was entirely a very overgrown 'Perry's Almost Black'. It had grown out of its pot considerably.

We hoisted the pot and trailing roots and leaves out of the pool and took to the shady side lawn. 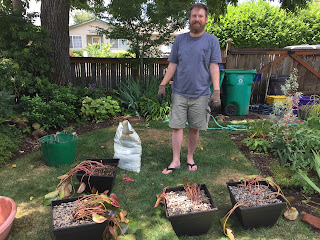 James had pre-washed the gravel and laid out the pots partially filled with dirt and three PondTabs.  The pots I chose were a little more than I wanted to spend for something I will never see submerged in the water, but I liked that they were wider on top, giving lots of space for growing crowns.

Note: Remember to fertilize lilies monthly as they are exceptionally heavy feeders!  They should be fertilized monthly during spring and summer. Yellow leaves, infrequent blooms or slow growth usually indicate that the plants are not getting enough food. That being said, I usually only fertilize two or three times a season, because I forget. So do as I say, not as I do.

I got to work separating the plant into divisions, so that they could be replanted quickly and put back in the pond. You don't want them to dry out and it doesn't take long.

I ended up with four new pots and saved what was left in the original pot.

Hopefully I have learned my lesson about neglecting my water lilies.

But I wouldn't hold my breath. I seem to recall similar blog posts in the past, so I'll probably be doing this again next year and cursing myself.

Some pics of the other water lilies this year below: