2016 went out like a lion and then that lion hung around for the first few weeks of January 2017, licking it's paws, batting my shrubs around like toys and basically pissing off everyone.

December to January, we had four separate storms that first dumped ice and then about a foot of snow everywhere. One night it took me three hours to get home from work and that was a short commute for some.

All this snow and ice was beautiful for a hot minute and then it got old, REAL old! Note to self: buy a snow shovel. 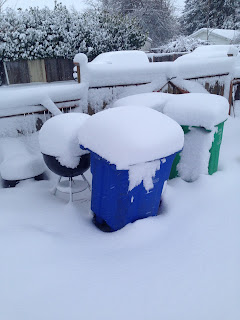 I know it's still too early to make the call on whether or not certain plants survived Portland's recent Snowmageddon 2016-2017.

This past Sunday (1/22/17) was finally sunny and dry and the sun even came out for a few hours. It was heaven.

The urge for me to get out in the garden was immense. Portland is still to have nighttime weather this week just below freezing, so although I worked for a couple hours cleaning up, I didn't want to get too crazy.

Based on a quick visual survey this past Sunday, there seem to be some winners and some losers.

It was hard seeing my babies buried under the snow. I could only imaging the damage to some of the shrubs and trees when they were smashed with the weight of all the snow.

Many of the Daphne, Grevillea and Osmanthus took it hard, or so it looked. Many of them popped back up when the snow melted, although they have new "holes" or clearly need to be staked back to a more upright position.

I have to say I feel like the garden did really good overall.

A lot of the damage seems minor and there was very little limb breakage. I always fear the big walnut trees will lose a limb and take out a parked car or the fence.

Some of the less hardy for our climate shrubs seem to be winners, but perhaps I had no reason to worry? Many of the Australian or New Zealand shrubs I have coveted the past few years, like Grevillea miqueliana 'Sunset', are actually hardy to 5 to 10 degrees. I don't think it got quite that cold.

There were many times I got in my car in the morning and saw that the temperature was 19 degrees at 7:30am.

Since we had so many days below freezing, I just figured the cumulative effect of weeks of freezing temps would finally get to the marginally hardy plants.

When the temps finally get warm (70's), perhaps some of the plants that looked okay now will show their real damage. I'll reassess in a few weeks too.

I'm still awaiting the verdict on the fish.

In past winters, they have survived 10 degrees for three days, so I'm hoping for minimal losses.

I'm confident that the fish in the 300, 180 and 150 gallons have all survived along with their waterlily, the 70 gallon may be another result. Thankfully they are on the thaw. The ice on top was easily 8 inches thick. 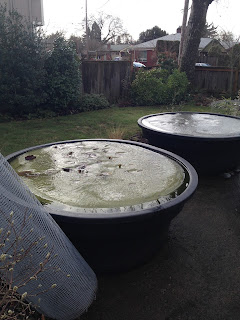