As part of my summer Haitian vegetable experiment, I am growing Sorghum 'Rox Orange'.

In trying to figure out what I can do with it once it is ready to harvest, I have come across many interesting facts about sorghum.

Sorghum is an annual grass. Most varieties grown in the U.S. are dwarf varieties, with canes under 5' in height and suitable for harvesting with farm machinery. There are taller-stemmed varieties which are grown in other countries too.

It's been amazing to watch it take off in my garden. It was only planted mid-May and now almost the first week of August, it's nearing 7' tall and about to bloom!


Sorghum originated in Africa approximately 8,000 BC, and then spread through the Middle East and Asia via ancient trade routes, traveling to the Middle East, India and China along the Silk Road.

The first known record of sorghum in the U.S. comes from Ben Franklin in 1757, who wrote about using it to make brooms. He's also believed to have introduced the first grain sorghum crop to the United States.

Sorghum isn't nearly as famous as the "big three" grains of global agriculture: corn, rice and wheat. Sorghum is, however, the third most important cereal crop in the U.S. and the fifth (after wheat, rice, corn, and barley) most important crop grown around the world.

One of the advantages of sorghum is that it is a nutritious plant that will grow in tough places, thriving on one-third less water than corn.

Both corn and sorghum can be grown under a wide range of soil and climatic conditions. But unlike corn, sorghum's yields under different conditions doesn't vary as much. Consequently, it is grown primarily in arid areas where corn wouldn't make it without substantial irrigation. Corn loves it's water!

Sorghum still remains a staple food in parts of the world like India and Africa. Eighty percent of the area devoted to sorghum is located within Africa and Asia.

Sorghum has been widely cultivated in the U.S. since the 1850s for use in sweeteners, primarily in the form of syrup. The first seeds coming over from Africa on slave ships in the 1700s.

Sorghum flour is naturally gluten-free, which makes the flour produced from it's grains important for baked goods and cereal.  The seeds can be cooked like rice, made into porridge, or baked into breads.

The juice extracted from sweet sorghum cane is pure sorghum, or sometimes called sorghum molasses. Real molasses is made from pressed sugar cane. In each case though, the pressed juices are clarified and concentrated (boiled) to make a condensed syrup.

I plan to taste-test the cane - it can be chewed like a piece of sugar cane. I have too little cane and lack the equipment to press them to make syrup, but here is an interesting link on how to make syrup from Sorghum.

The seed from the sorghum can be popped like popcorn, which is what I am most looking forward to trying. There are videos online on how to pop it just like popcorn. All I have to do is figure out how to remove the seeds (and winnow?!?) them to get all the bad parts out.

Sounds like fun? Or perhaps a lot of work?

We've been testing the waters for four years, but I think we need to take a break.

I realize that's not a lot of time to get to know each other, but, I have to tell you... I'm just not that into you.

At first, I thought it would be a great relationship. You were cute enough in the beginning. Your evergreen leaves and pretty fragrant flowers seemed appealing. I thought you might eventually block the hot afternoon sun with your 40' height.

Now I feel like you're more of a "friend" than a pretty flowering tree to me. 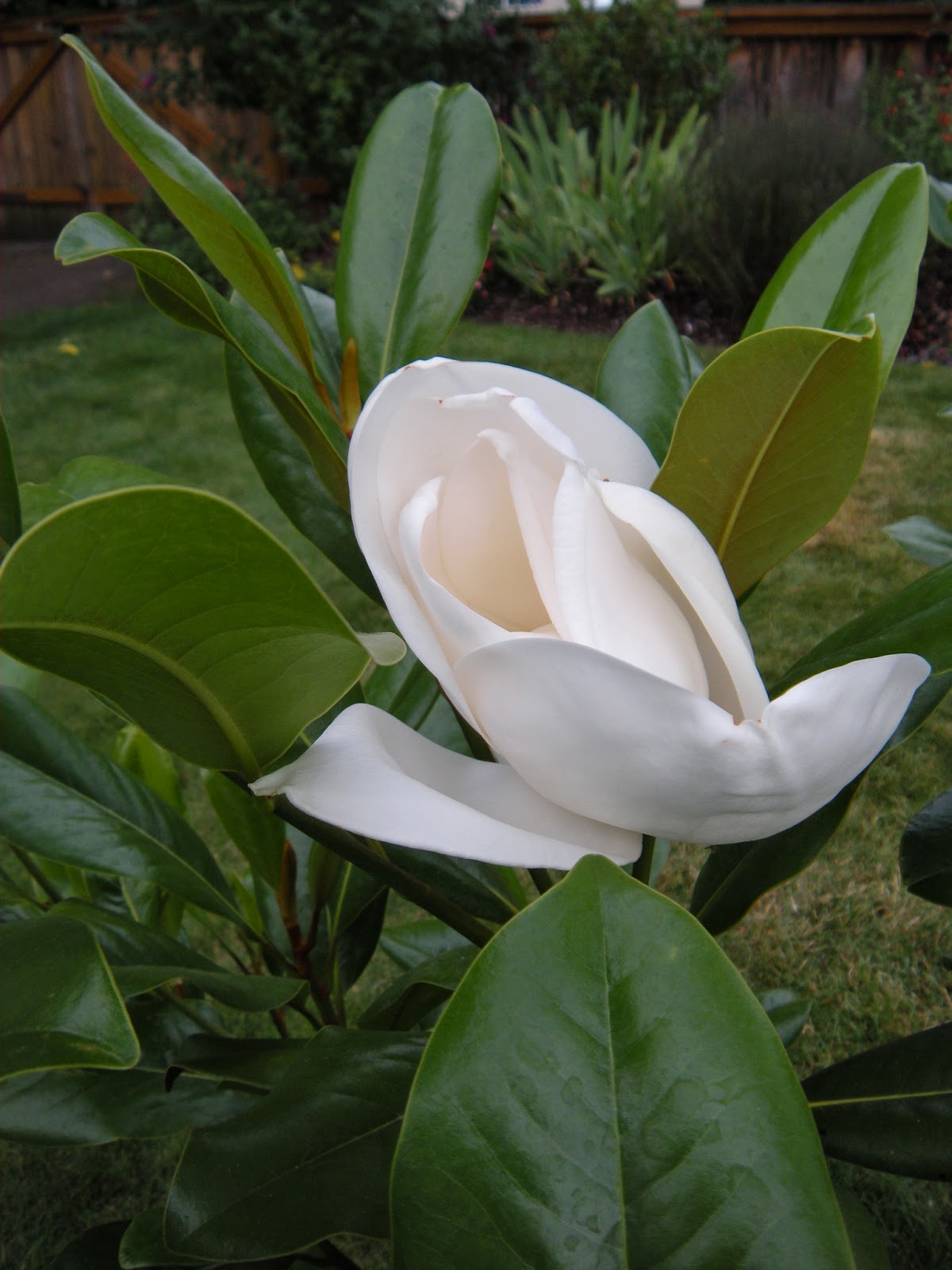 Over time, your open shape just wasn't getting me excited any more either.

The one bloom you had this summer turned brown before it even opened. Had I known your flowers would only last 1.5 to 2 days before turning brown and falling off, I probably wouldn't have dated you to begin with.

I tried to ignore your nasty habit of dropping your leaves in summer. 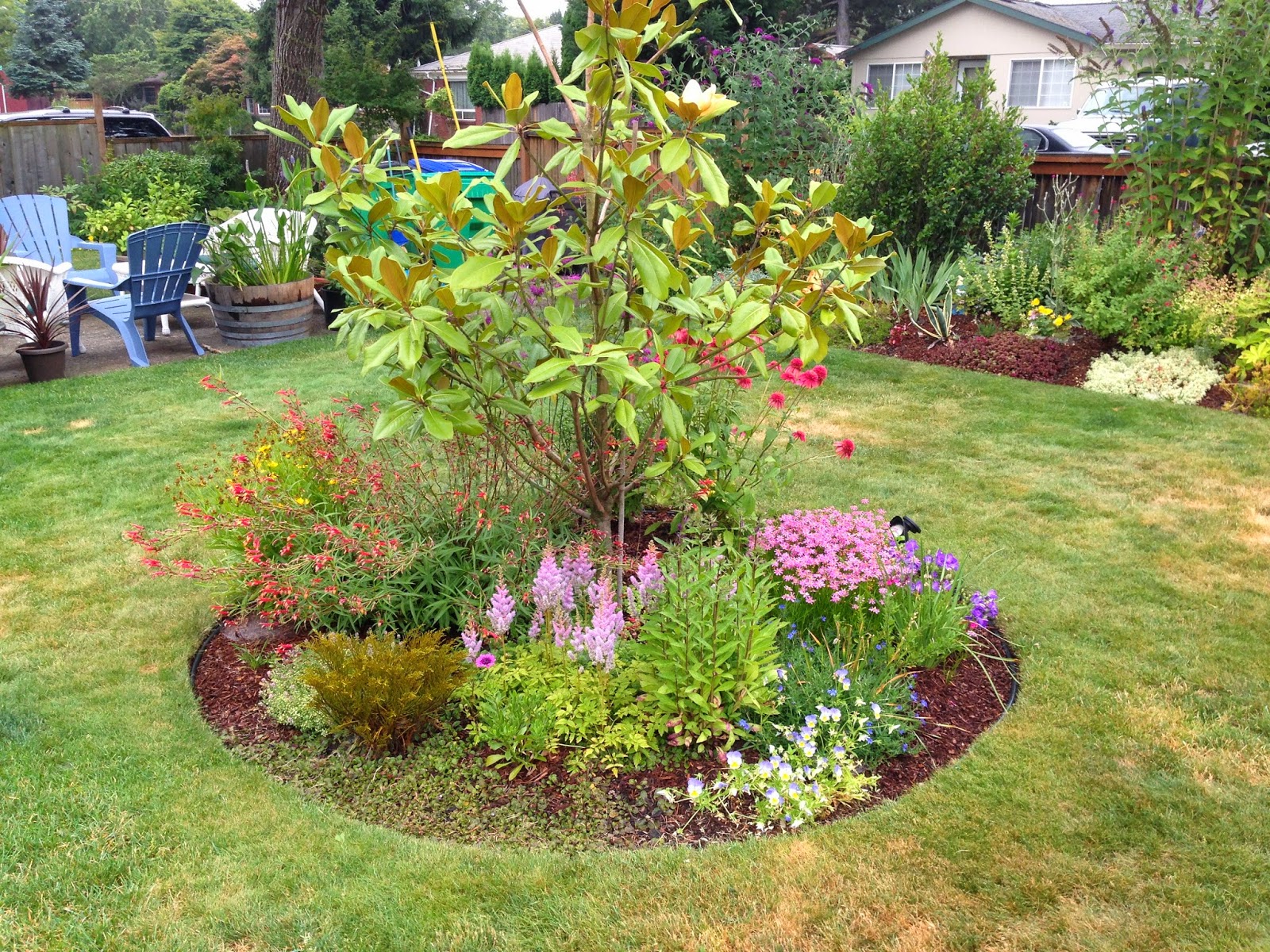 It has been great getting to know you, but I think I need to spend time with other trees.

I'm sorry to see you go, but I think you need to move out.

Perhaps some other pretty young thing will come along that will bloom longer and be far more satisfying to take your place?

It's been too hot too soon. Then yesterday was so much cooler, I felt like I needed a sweater.

I'm trying to keep up with my watering to make the perennials happy and to settle in my new Cercis canadensis 'Merlot'. The grass is on the way to "beige" in some spots.

The veggie garden is beyond crazy. I still haven't had a tomato to eat yet. I'm a good month behind, but getting there!


Enjoy all the blooms!

I forgave you for murdering my cute little Acacia bormanii...

I forgave you for beating up my Palm trees and Pittosporums..

I forgave you for a multitude of other little sins too...

But I wasn't going to forgive the loss of my favorite Lemon Bottlebrush (Callistemon pallidus). 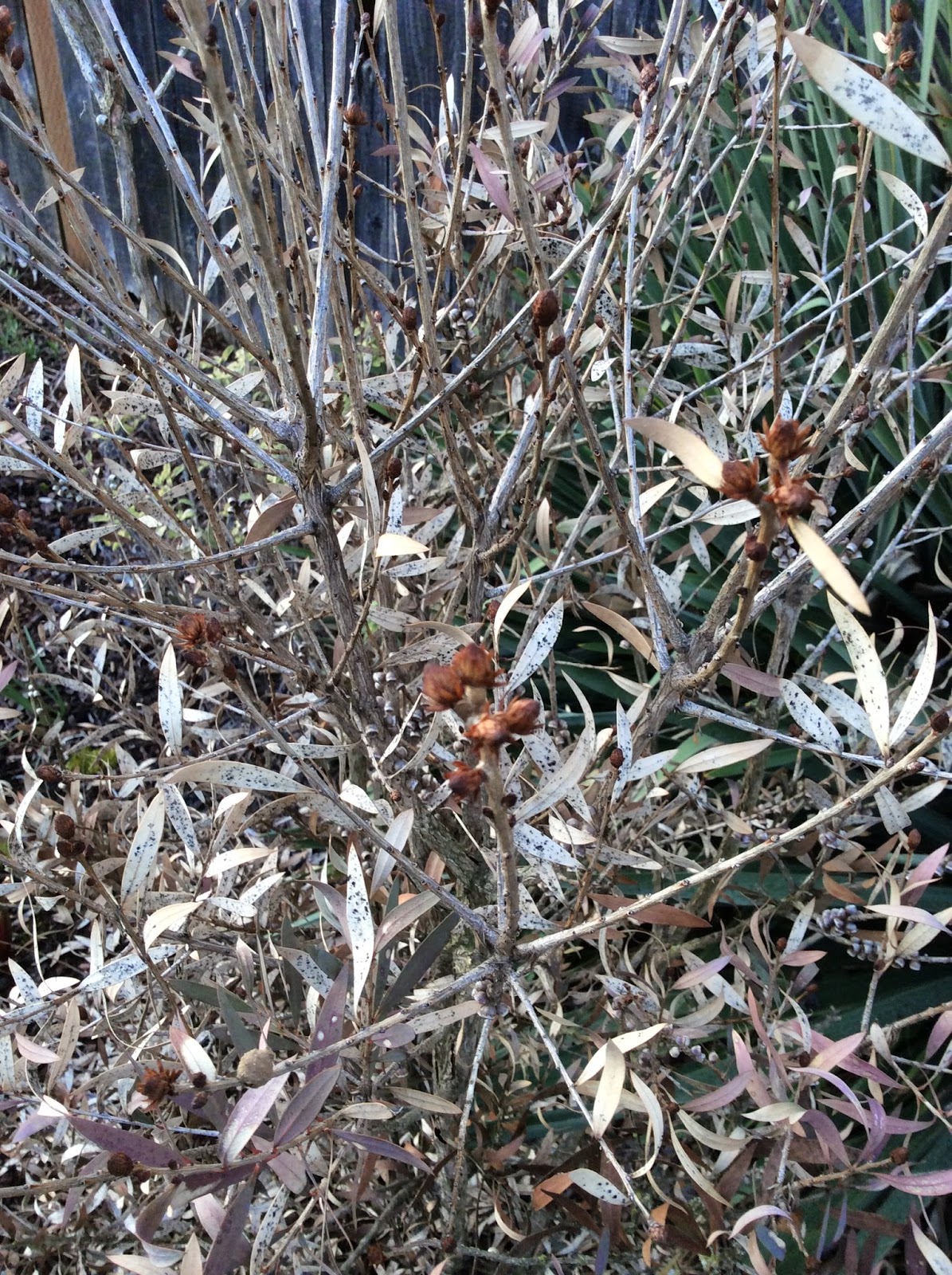 While not a particularity special or pretty variety, it was my first, biggest and oldest Bottlebrush and it was special to me. It was my first foray into zone pushing, slightly inappropriate for our climate plants

In late spring, it was so sad to see it wither away and then explode in a pile of dead leaves everywhere. It looked VERY, very bad.

It was well into April/May and there was not much sign of life. I just kept looking at the dead stems, thinking I should at least get my pruners and cut them off. They were sticking out like sore thumbs. I wasn't going to dig it out just yet though.

In June, I noticed new growth at the base of the plant and was hopeful. I was almost afraid the new growth was a weed or some other plant trying to trick me. 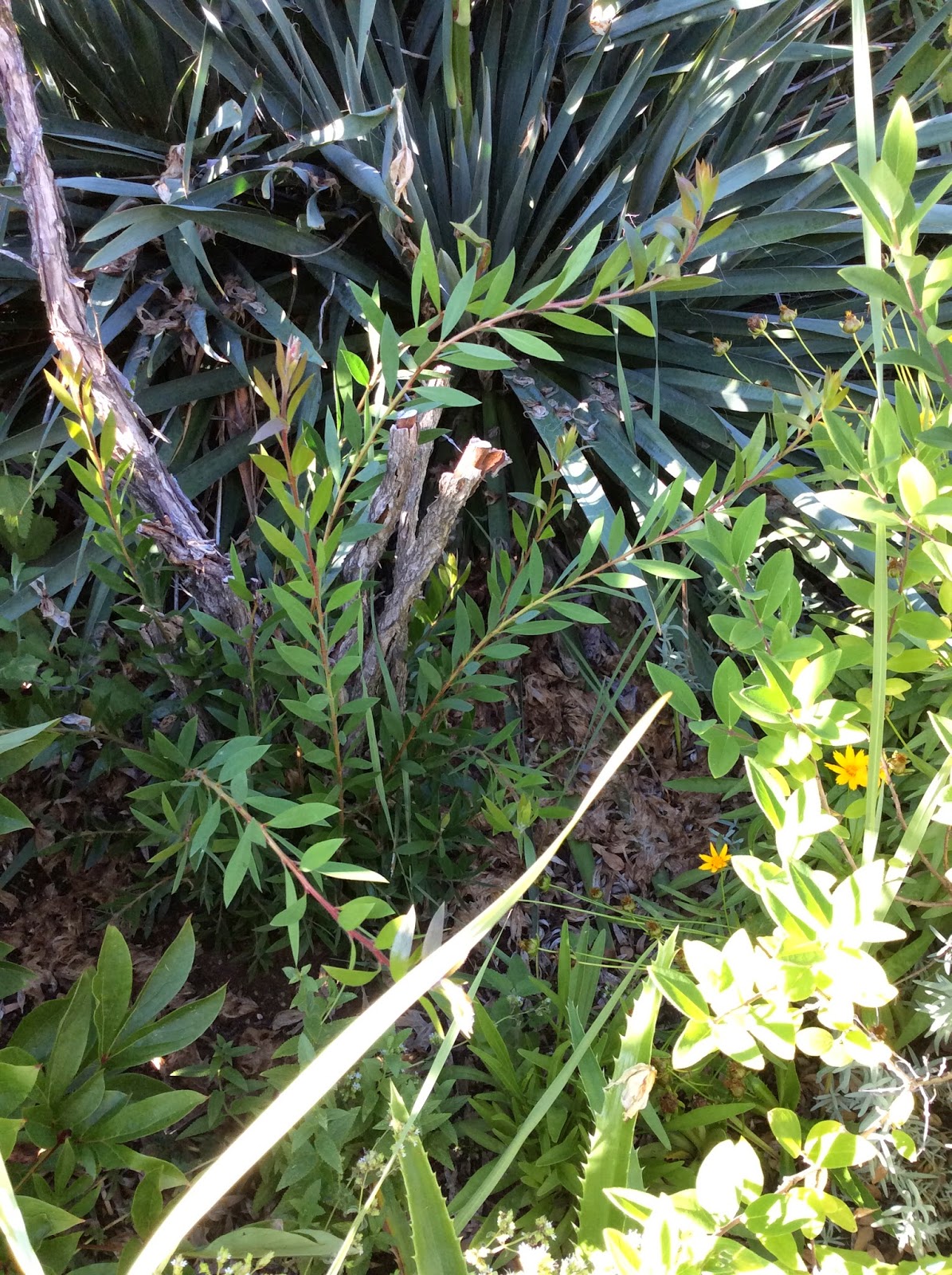 Presently, it's put on about a foot of growth and I am relieved. It may be awhile before I get flowers again, but at least it's still with me!

Now I can FINALLY cut those dead stems off!