One plant in the garden that really shines today is Sarcococca ruscifolia aka Fragrant Sweetbox.

It's one of those shrubs you smell before you see. Sarcococca blooms in my garden before the other fragrant spring shrubs.  The nearby Edgewarthia has a few open flowers just starting and the Osmanthus and Daphne are a few weeks out yet. 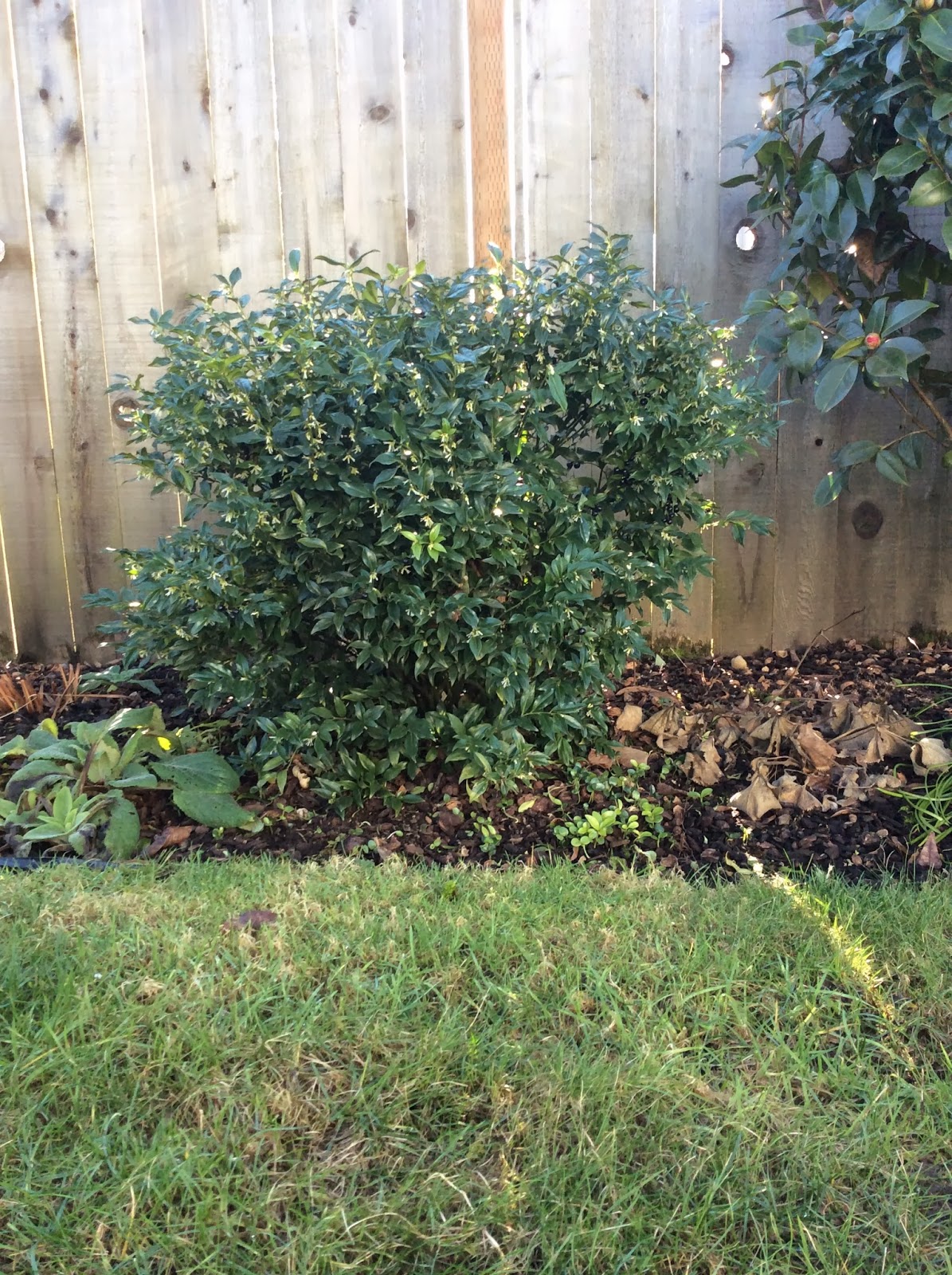 While I don't consider the white fragrant flowers to be showy, as they are generally hidden underneath the stems, the vaguely vanilla/baby powder/honey fragrance they give off can be intoxicating this time of year, when we are starved for anything blooming or fragrant. 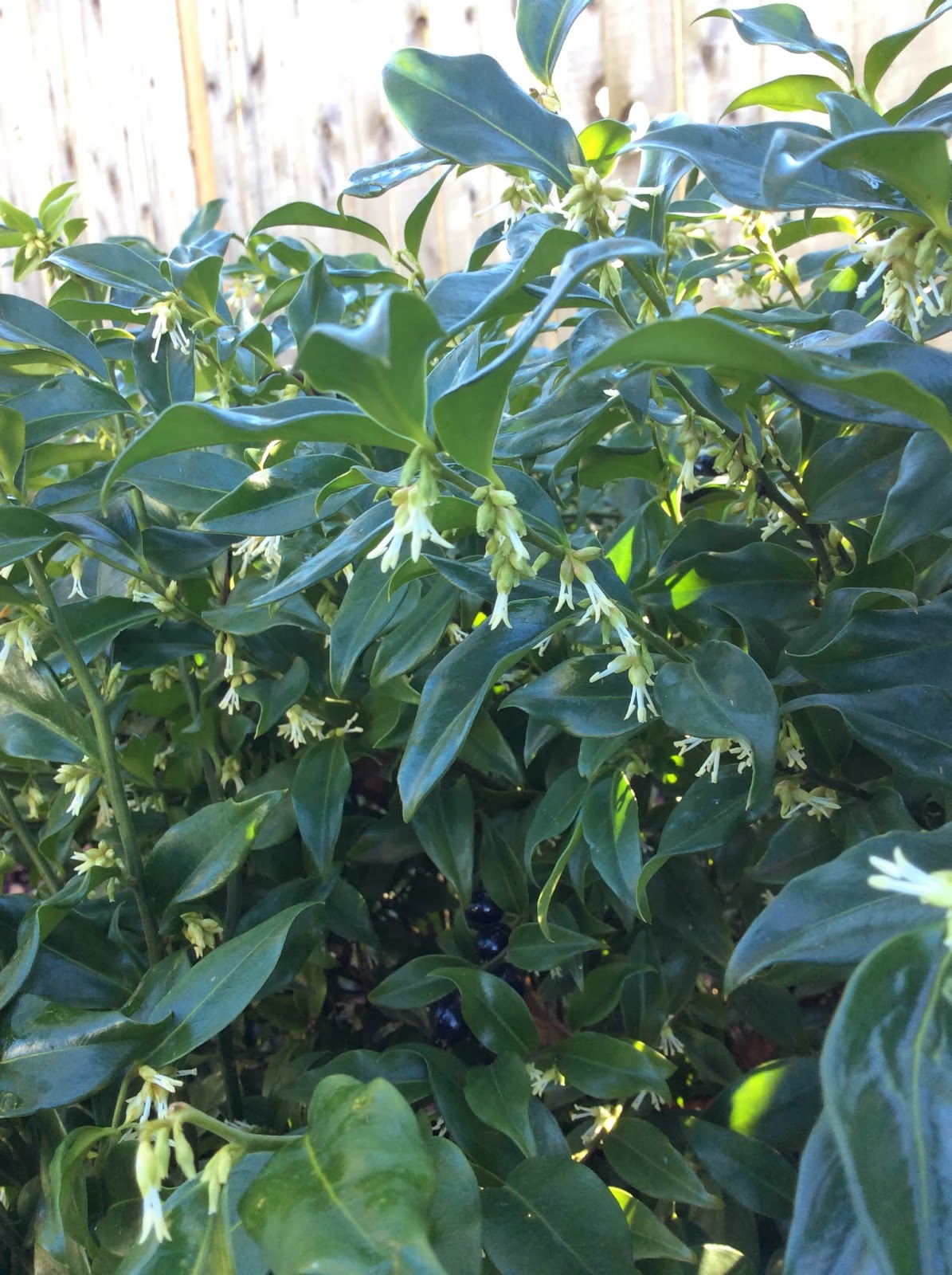 The berries are red which ripen to black. The plants seem to spread themselves around by seed, but the babies are easy to pull and larger ones can be potted up and shared.

It is a dense and low growing shrub that doesn't get too large, typically grows 3-4" tall and as wide. Likes moist but well-drained soil in part to full shade. Mine is growing happily under an English walnut tree.


Seems to have no insect or disease problems. They can get a little stringy and floppy with age, so I prune after flowering to help maintain a nice full shape.

Posted by Matthew - The Lents Farmer at 3:35 PM No comments:

One Step Closer to Spring?

I've noticed on my phone that next week's weather forecast seems a bit on the cold side at night.

There has been talk of drought in Oregon this year due to all the dry weather we've had and the lack of snow in the mountains. The rains the past few days will help a little. Signs of spring are popping up everywhere, but it still feels like Mother Nature hasn't given us all of our winter yet in Portland. I'm still expecting a spring snowfall in February to mess things up. 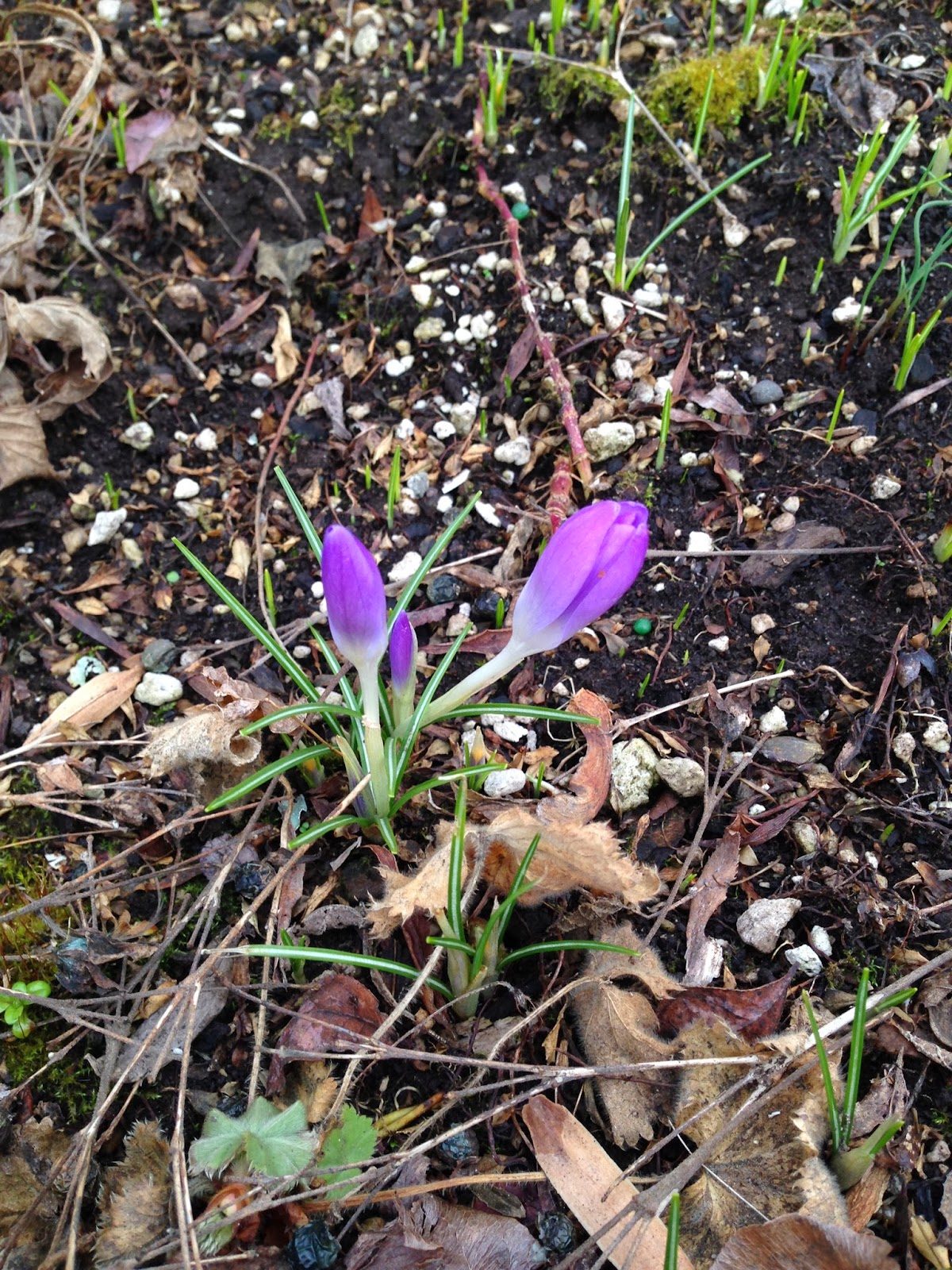 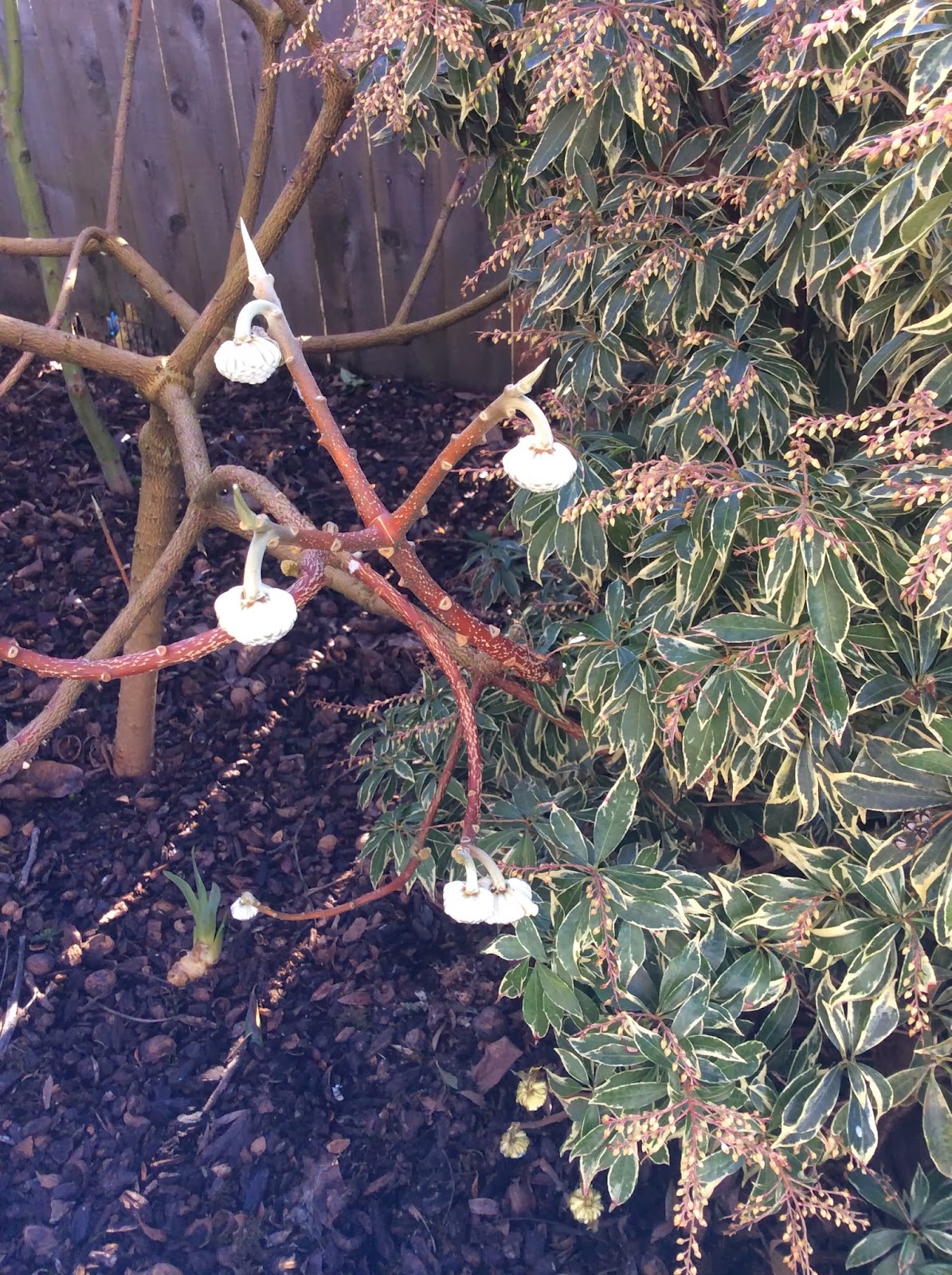 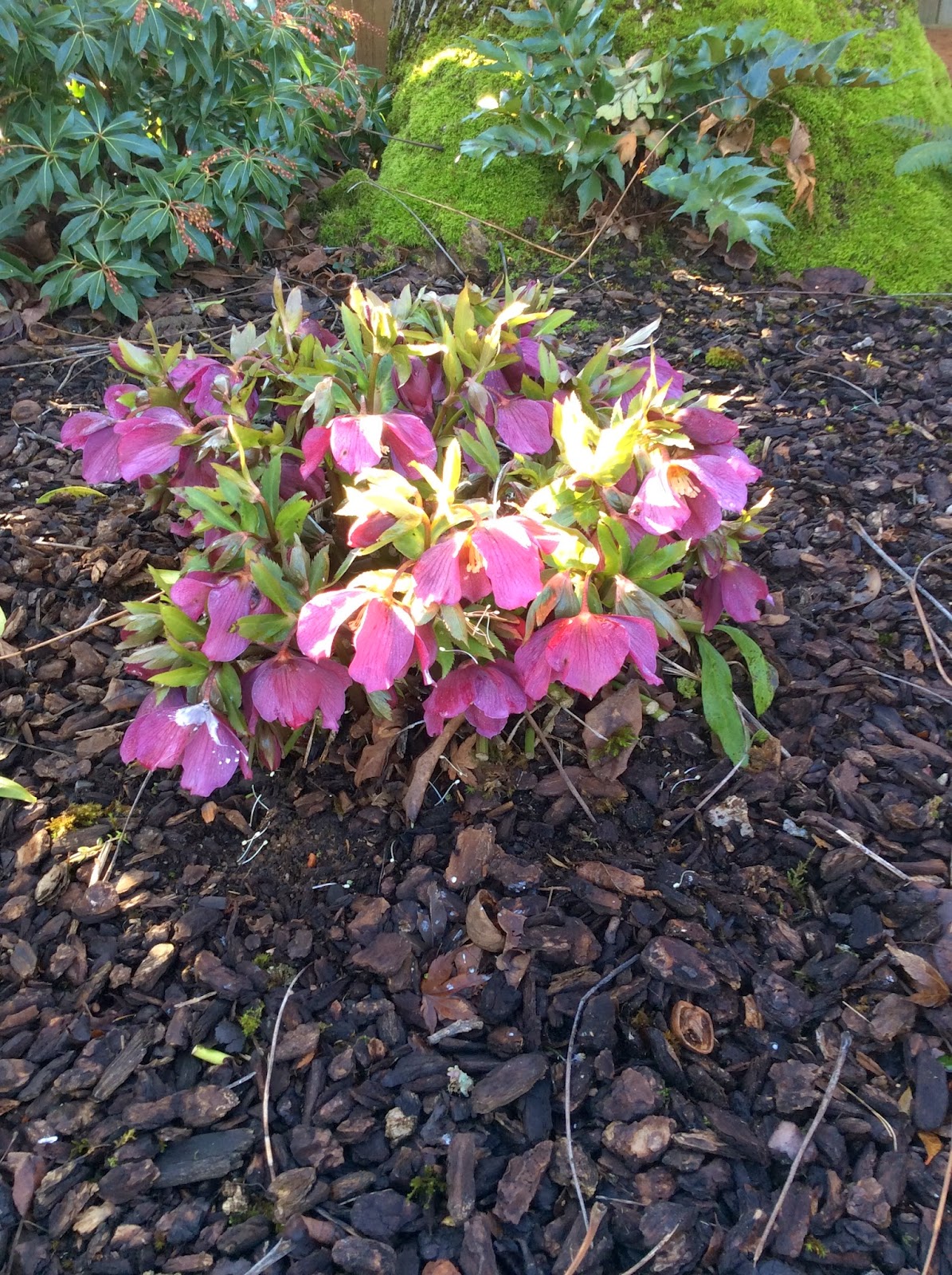 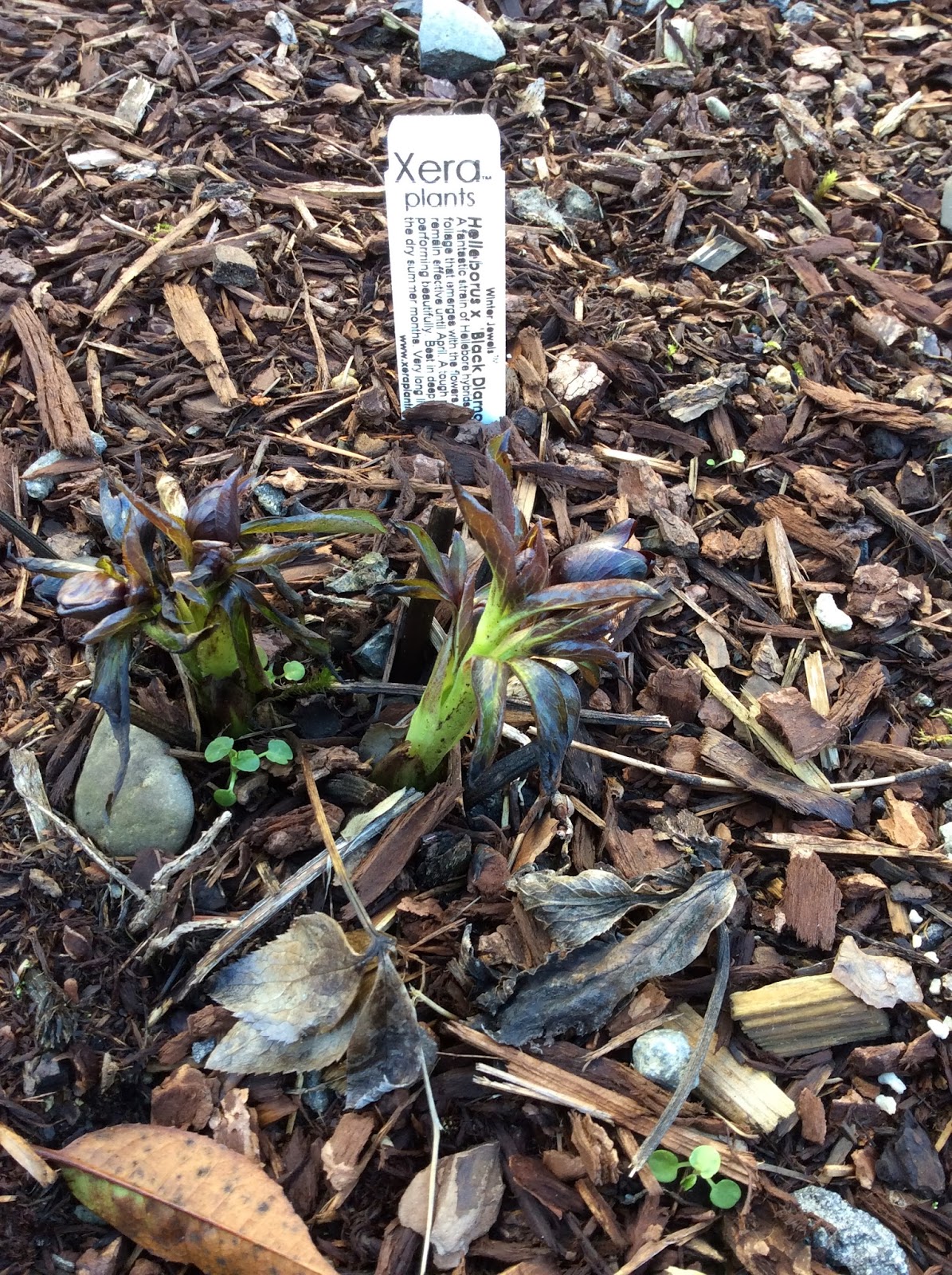 Until then, I'm going to enjoy the flowers...


Last week, I posted some pictures of my cactus collection with their little plastic animals.

What I didn't show is that occasionally my cute cactus have unwanted live bug friends that need to be dealt with.

My favorite solution is a cheap and easy one. It costs a few dollars and is non-toxic.

I keep a bottle of isopropyl (rubbing) alcohol, a small measuring glass and an arts and crafts paintbrush at the ready for just such an occasion.

The pictured Lobivia wrightiana has had a few mealybugs recently.

Generally, I prefer to squish them with my finger when I can (instead of using insecticide), but like most cactus, the spines make it hard to remove them easily and certainly not with my finger.

On a sunny day (easier to see the offending bugs in the daylight), I pour a small amount of alcohol into the glass and then dip my paint brush into the alcohol. The thin point of the paintbrush makes it easy to get the alcohol through the spines directly onto the mealybug.


The alcohol kills the mealybug and quickly evaporates and does not harm the plant. The bristles of the brush can also be used to squish the bugs or to flick them off the plant.

Every few months, I pick each plant up in their pot and give them a good once over visually for bugs. It's a good time to water and rotate them too.

It's Officially Spring in Portland!

My Snowdrops say so! 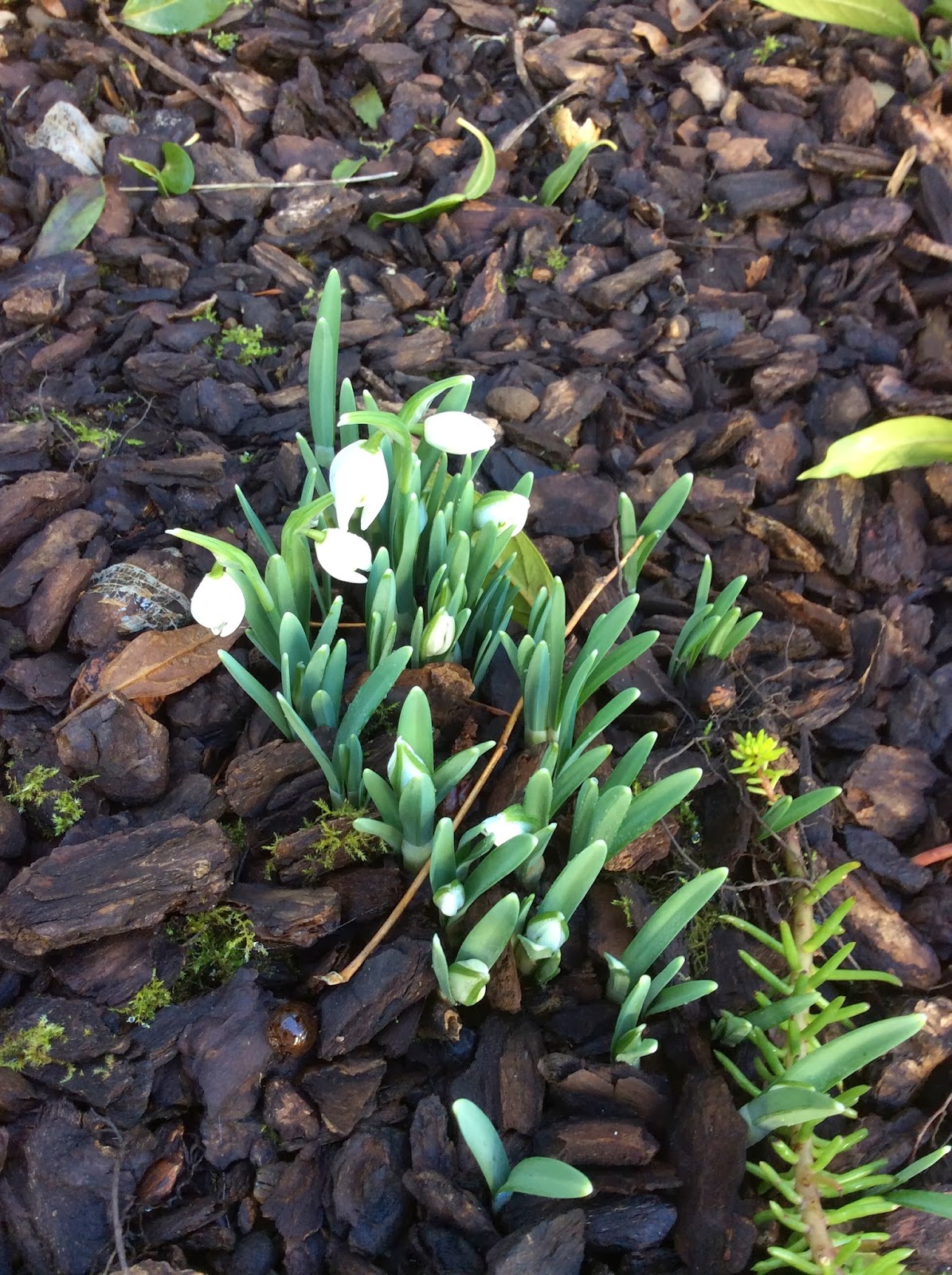 Some may find today's favorite plant a little too on the blah side of things, or perhaps too ubiquitous, as they can sometimes be overused in home foundation plantings.

I, however, find Pieris, more commonly known as Andromedas or 'Lily of the Vally' shrub, to be useful and lovely in a mixed boarder. They are best mixed in here and there in the background.

As far as broad-leaved evergreens go, they have more year round interest. New spring growths are generally bright red/pink as they emerge, and the flowers are chains of white (or red) bells in early spring (February-April). The flowers are fragrant, but smell a little like menthol.

There are many varieties with variegated foliage that also have intensely pink colored new growth.

Pieris grow much like a Rhododendron or an Azalea, preferring a shady spot, in well-drained, moist and acid soil. Drying winds and hot direct sun should be avoided. They will burn up quickly in hot sun.

I prefer to remove spent flower stems after blooming. They are very easy to clip off with a pruner. After blooming is also a good time to shape plants.

Most Pieris can grow to 10' with maturity, so be sure to leave room in your boarder for the full grown size. If that's too big, there are some adorable dwarf varieties that stay quite small (less than 2').

Be sure to try one in your garden. 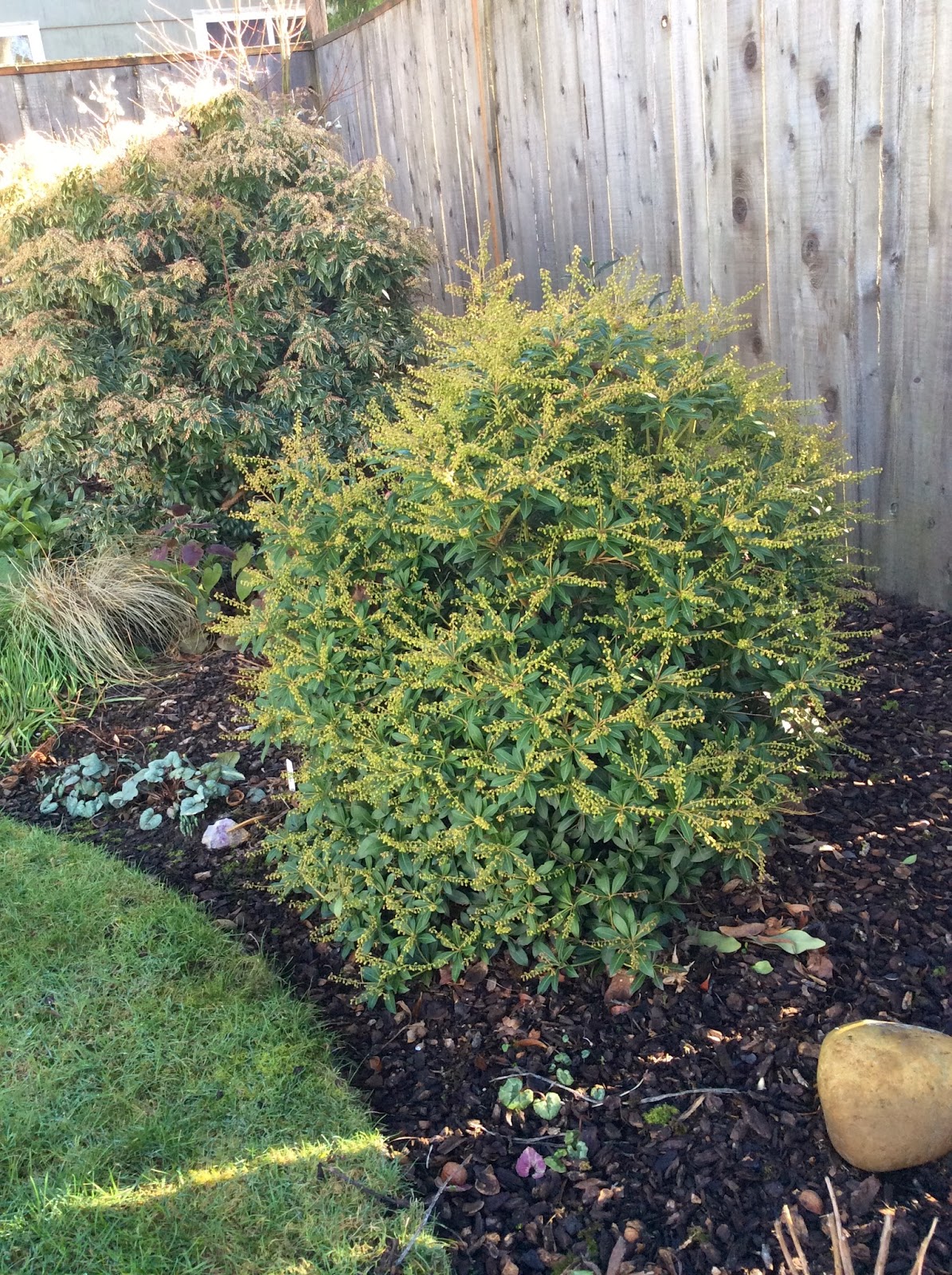 Close to my work there is a toy store that sells rubber animals for .50 cents.

How could I resist?!? 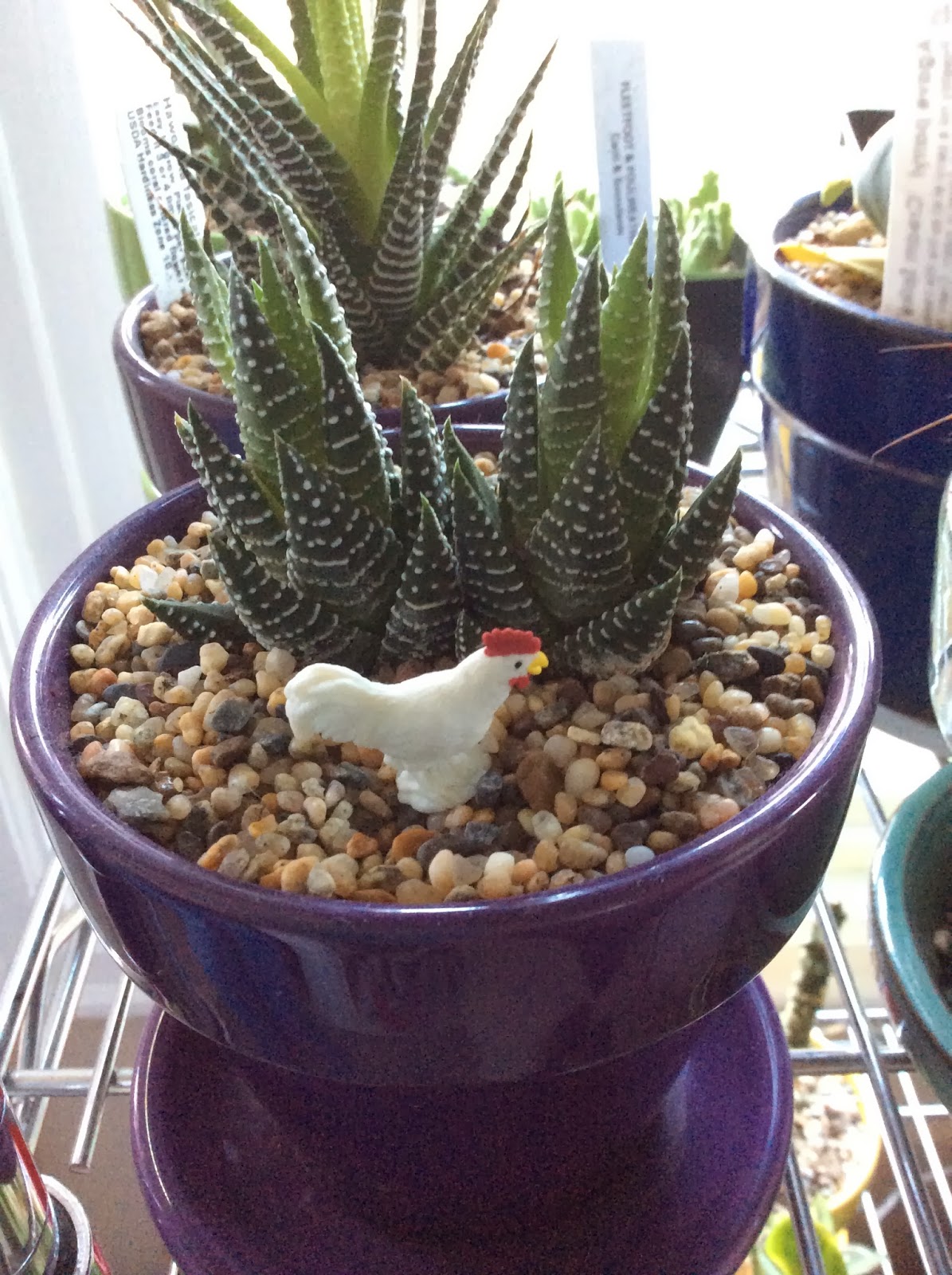 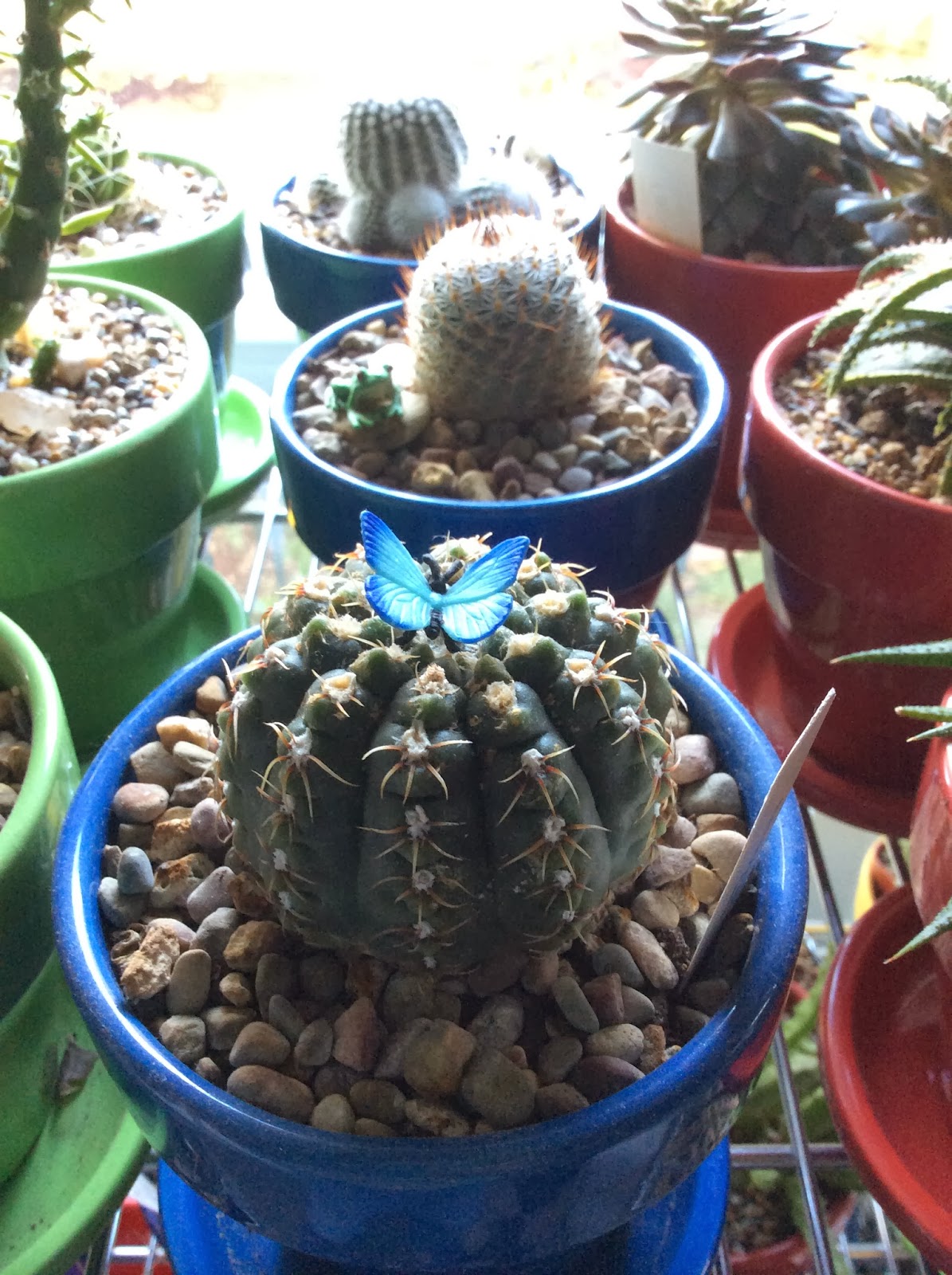 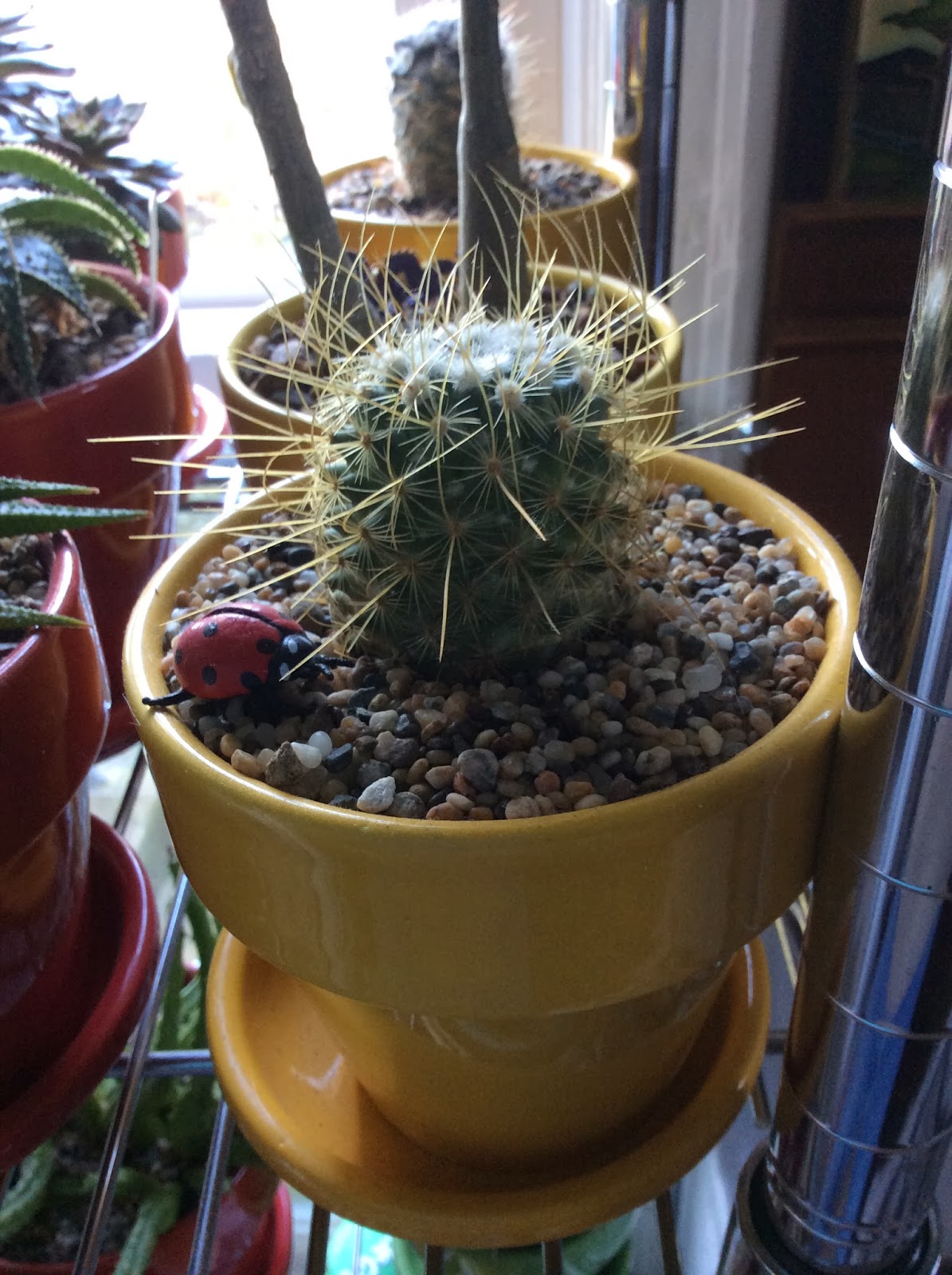 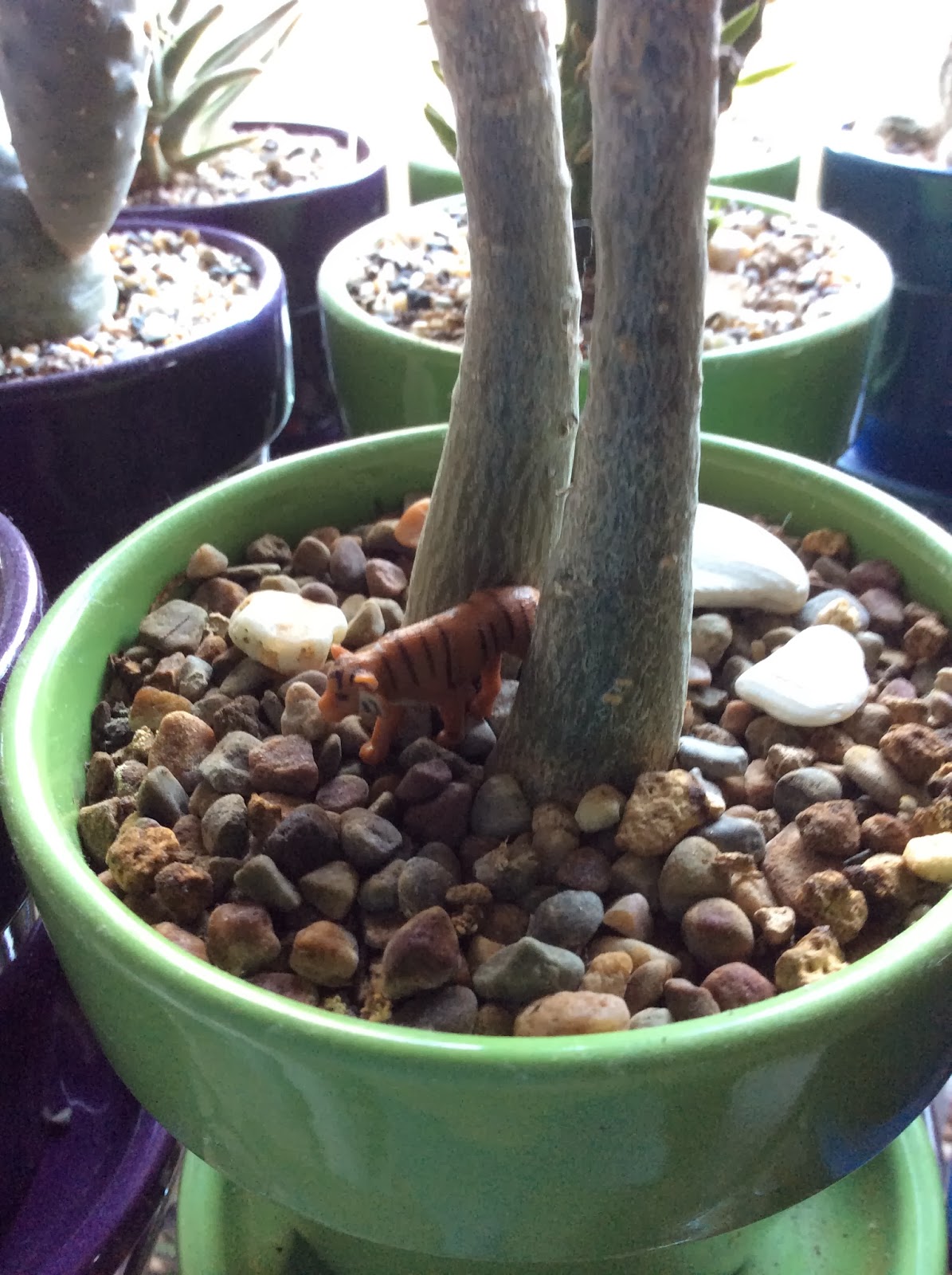 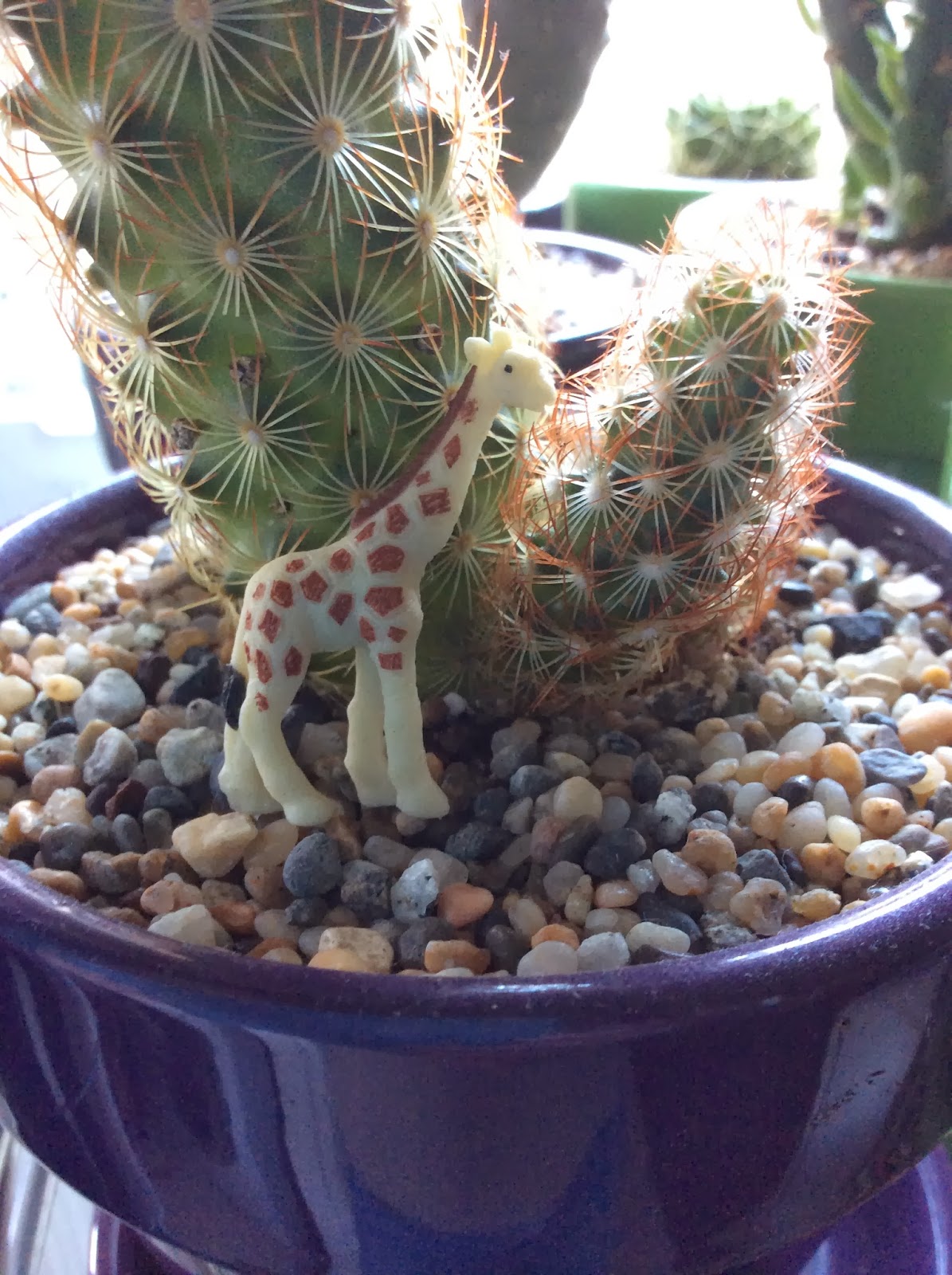 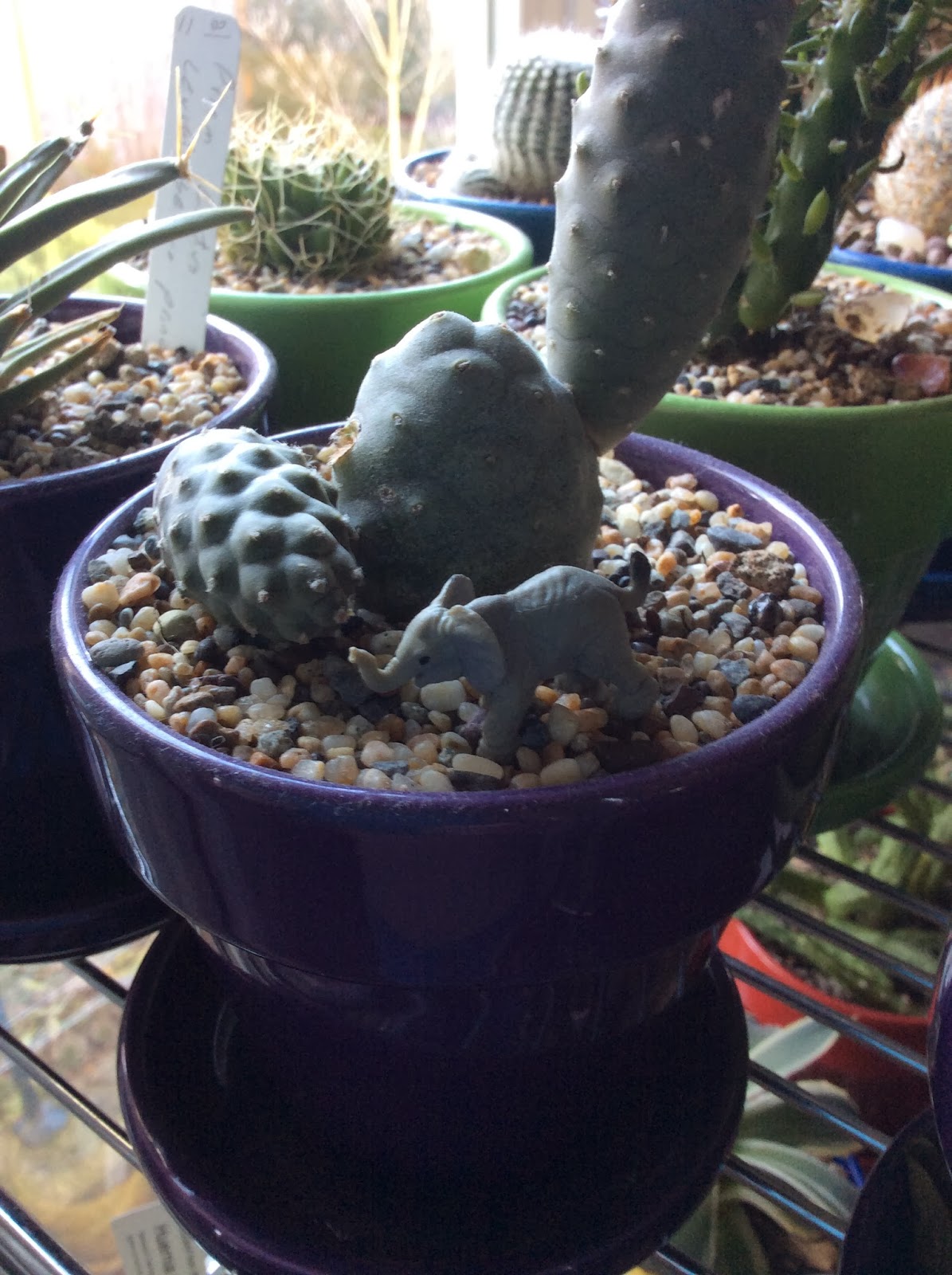 Posted by Matthew - The Lents Farmer at 11:33 AM No comments:

A few years ago, I had a 65-gallon aquarium in my living room until one stormy winter night a neighbor's pine tree snapped in half and fell onto the power line that fed my house (ripping the power anchor off) and I was out of electricity for three days.

The temps that night were in the 30's. I had to net the fish out of the tank in the dark into a plastic bucket,  and then tried to keep them warm next to the gas range burner before transporting them to a friend's house, who coincidentally also didn't have power, but had a generator, so the fish heater could be plugged in again. 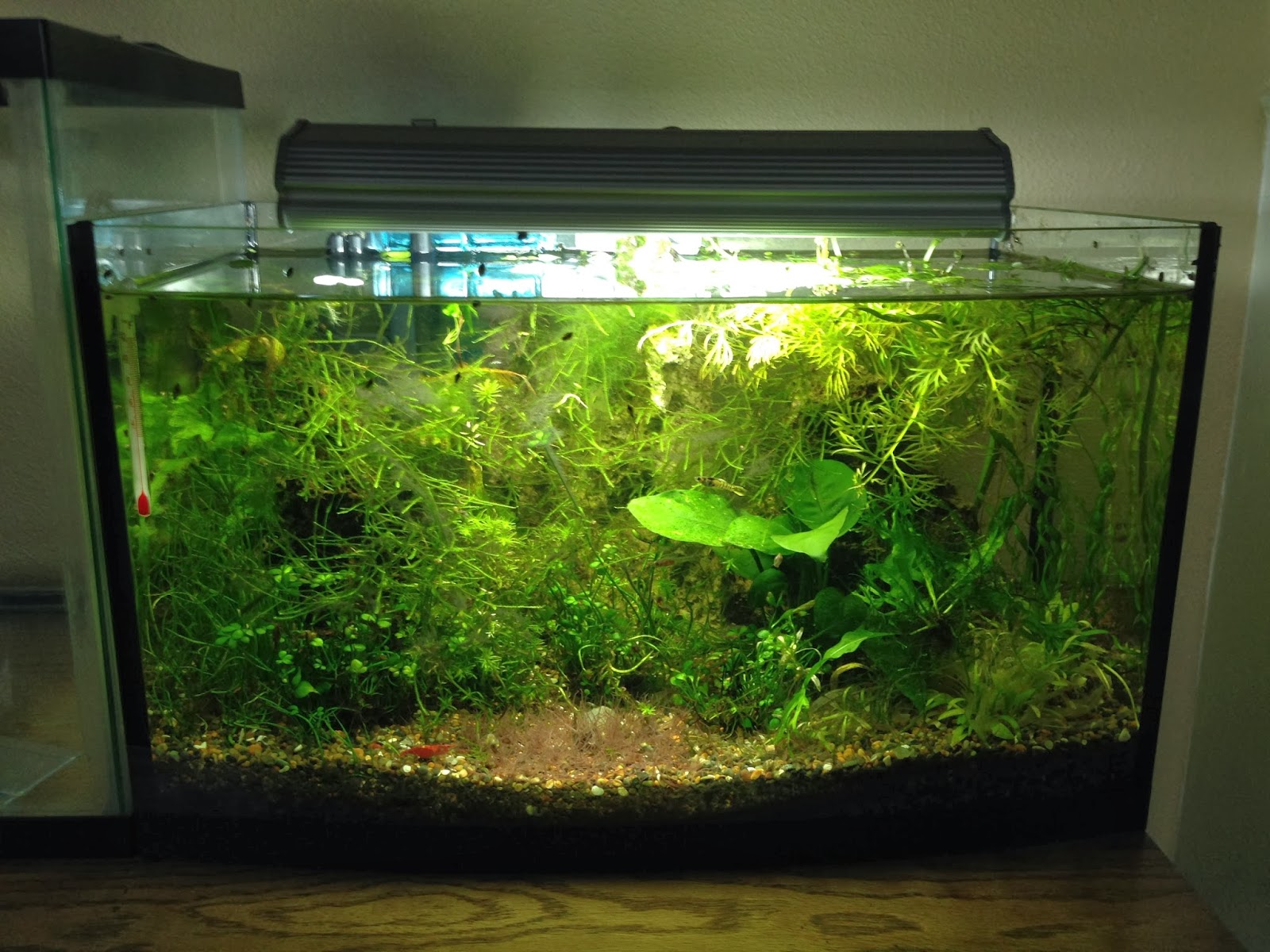 Earlier this year, I decided to try my hand at keeping fish indoors again, but this time in a much smaller way. I got a 6-gallon micro aquarium and I was going to keep shrimp.

There are several kinds of freshwater shrimp for aquariums. Some are a little more tricky (and more expensive) than others, but they are generally pretty hardy and fun and easy to keep.


In the process of shrimp keeping and trying to maintain a small aquatic garden for them, what I have noticed is that I have to sometimes "weed" the tank. There are several ugly algae growing off the plants.

I hoped the shrimp, snails, and/or algae-eater fish would take care of them, but alas, they're not on the menu. 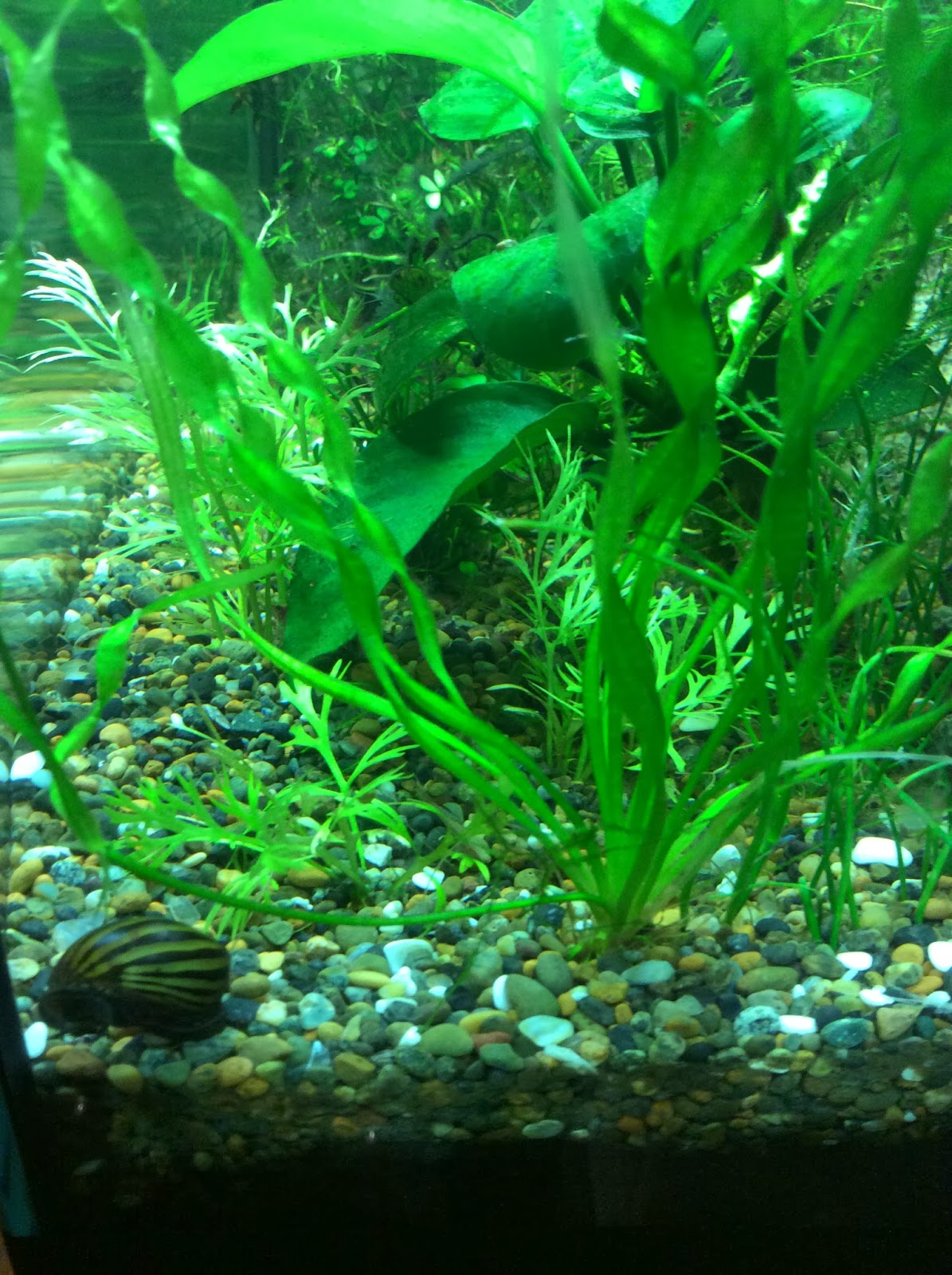 It is ironic that I happily murder slugs and snails in the garden, yet encourage and even purchase exotic ones for the aquarium in hopes that they will eat a bad weed algae. There are even snails that will eat other snails if you have too many in your tank. But you also have to be sure the snails you introduce won't eat your plants! Best to do your research ahead of time.

I have an extra long pair of tweezers that I used to pull out and stick plants into the gravel. I also use my extra pair of kitchen scissors to remove the worst of the plants/leaves covered in algae periodically.

It's very much a hands-on sort of thing and you just have to pull up your sleeves and get wet.

I thought my garden had weathered the recent arctic blast pretty well. I am now seeing that that may not quite be the case.

Some of the plants I thought had made it through with flying colors are now showing their damage.
There are a few shrubs I was sure would be dead, that now seem to be "okay" (but with some damage).


Wondering through the garden, I have been playing a new game called "What's that Crispy". I'm sure a lot of other Portland gardeners are playing the same game! 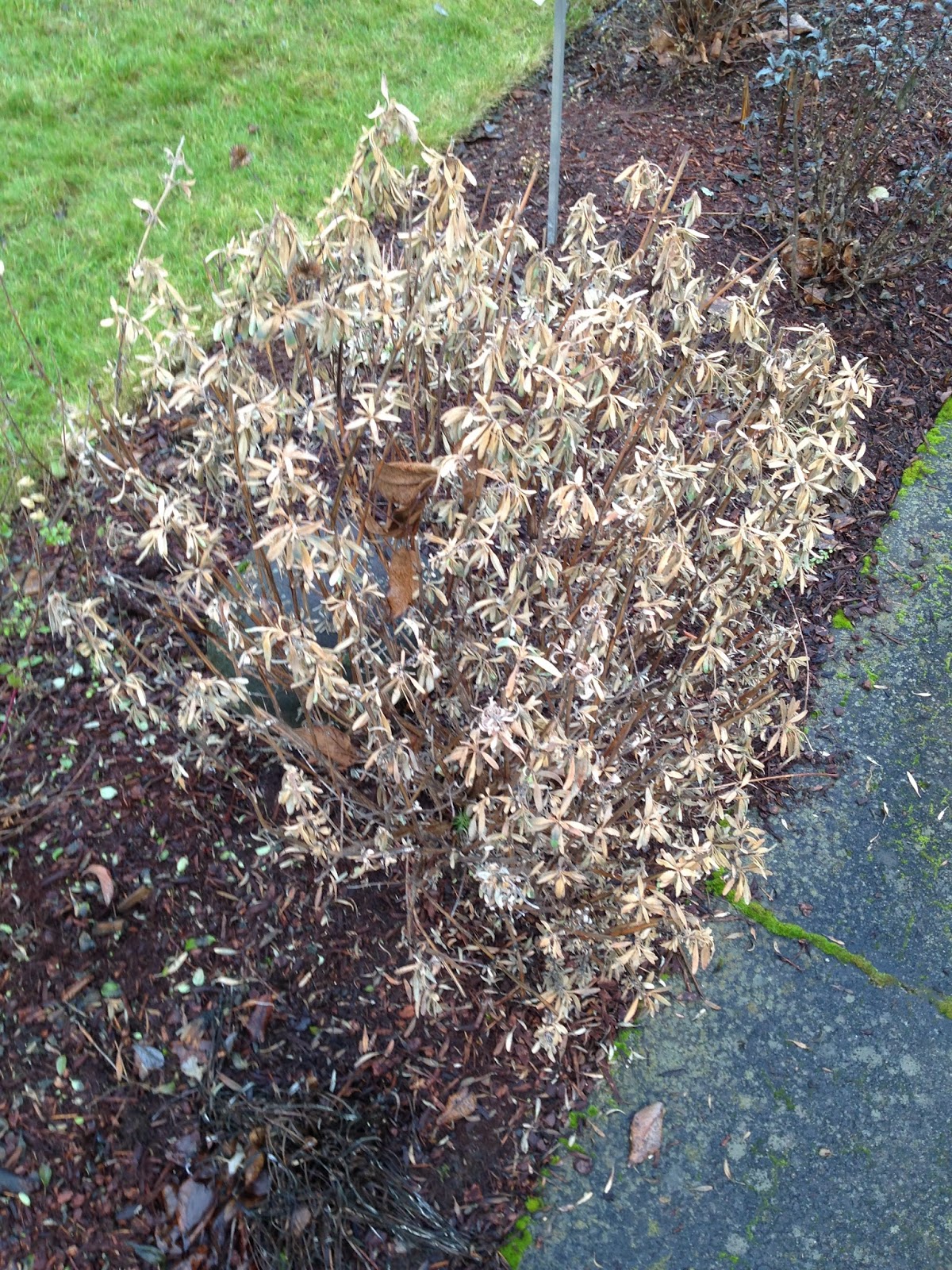 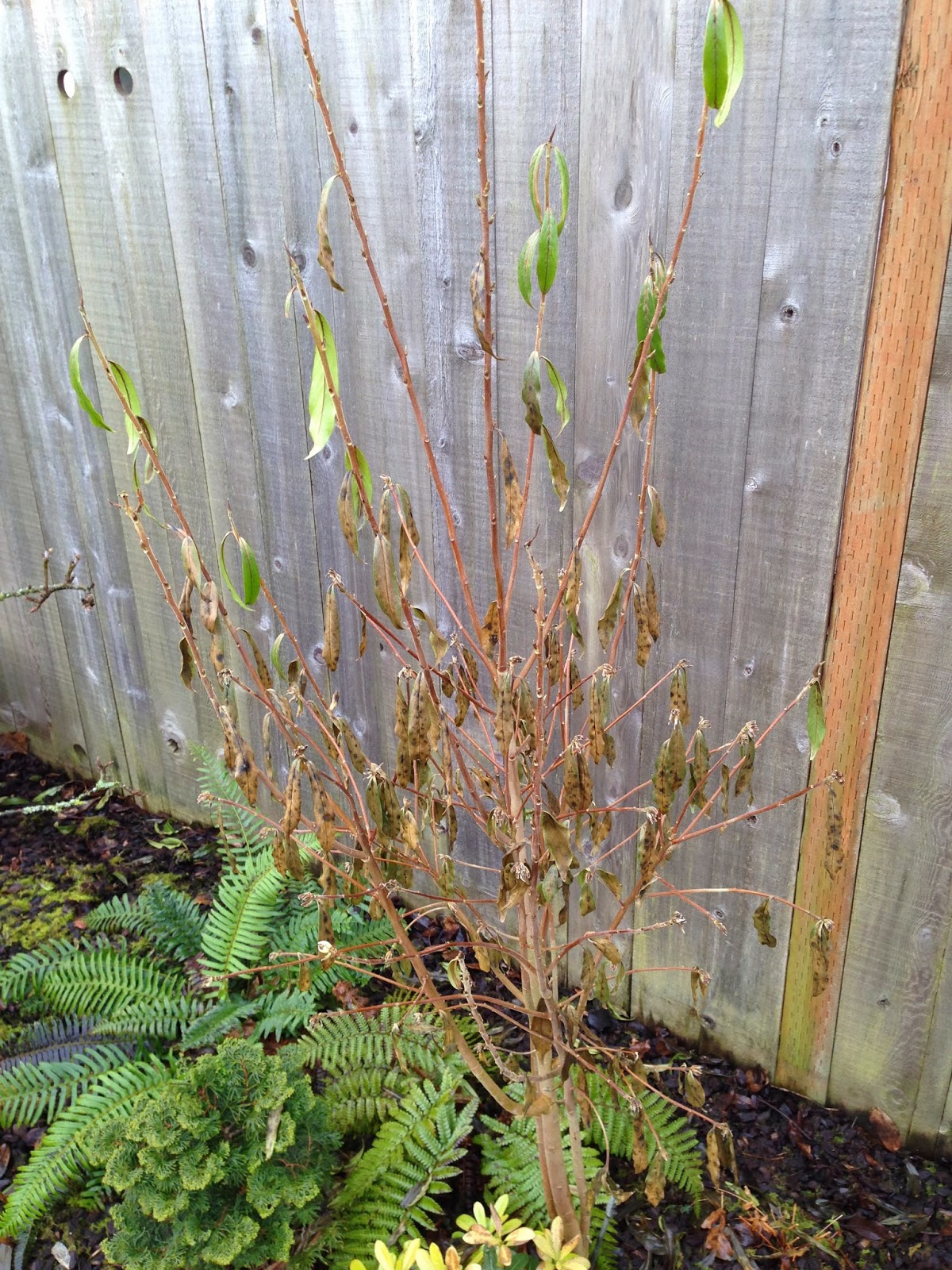 I guess the lession learned is that only time and spring will tell what is really alive and what is a gonner. I'm going to stop speculating and just see what happens.
Posted by Matthew - The Lents Farmer at 10:24 AM 1 comment:

For the last 9 years, I asked for a nice pair of pruners for Christmas. A new pair that felt like quality in your hand and not the same cheap rusted pruning shears I have been using for ages.

Although, in my former days of "pruning with wine", it was probably for the best that I had a cheap pair, that I never took care of and were so dull they could barely cut blades of grass. I did once try to remove the tip of my finger, but thankfully was not successful.

This year, a gardening angel heard my plea (way back in November no less) and the only gift under my tree this years was a new Felco pruner, complete with leather holster and ceramic sharpening stone. 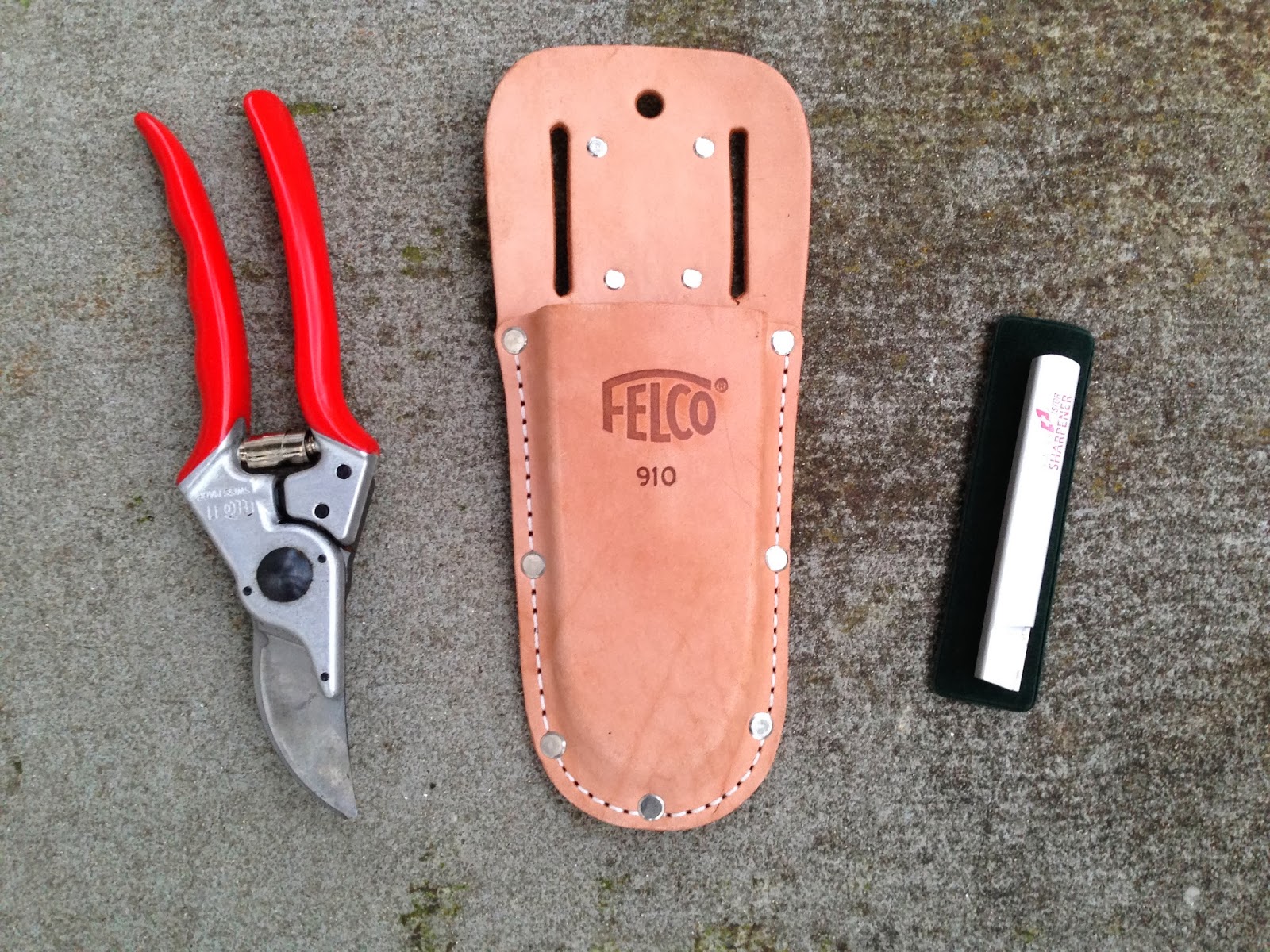 Now I feel just like a professional gardener would with my trusty bypass pruners nestled in their very own leather holster clipped onto my work pants.

It's like butter in my hands and I have yet to lose it. Since they are now "my precious", I have even cleaned and dried them after each use and carefully put them away.

I still need to learn to sharpen them. Below is a good video on pruner maintenance and really how quickly a pruner can be taken care of.

I'm sure it will take me longer to find orange rind oil and a Sharpie that actually works.

My New Year's resolution is to take better care of my pruners. That sounds so much better than going to the gym.

I'm so glad Christmas and New Year's are over.

The highlight of my 2013 holiday season, was not dying the Thursday before Xmas, when an idiot turned left in front of me at a busy intersection to make the light. This collision totaled "The Green Bean" (my 14 year old, trusty plant shopping car). Thank goodness, I came though the accident with only a stiff neck and a sprained finger.

That night, The Green Bean was towed to the body shop and it was all out of my hands. There was on my part, however, denial, anger, depression, speculation and then finally acceptance that The Green Bean was really going to be gone forever.

It still took two weeks over the holidays to finally hear the verdict officially from the insurance company. I will be sure to schedule all my future accidents well away from holiday closures.

It just so happened that I was off Xmas Eve until January 2nd, so I used this time to finish up Round Two of leaf clean-up in the flower beds.

In my crazy brain, Round One is the initial fall rake-up of leaves out of the grass. Round Two is the time consuming removal by hand of all the leaves in the flower beds. Round Three is a final clean up more towards spring when things have dried out a little.

While crawling around removing leaves and cutting back a few plants, I could already see the signs of spring stirring.


While I was not enjoying the holidays, but happy to be off work, I pondered the new year. Seems like 2013 was a year of transition for a lot of folks.

Here's to 2014 being a much better year for everyone!