I was fortunate last Saturday to be invited to a pre-tour of three of the five Beaverton gardens in the 2015 Garden Conservancy Open Day Tour (see link for more info) to be held Saturday, August 29, 2015 from 10am to 4pm.

Proceeds from this tour benefit the HPSO Elaine Joines Grants Program and the HPSO horticultural scholarship fund. Pre-sale of tickets is over, but tickets can be directly purchased on the day of the tour.

I'm sure in addition to the pressure of having scads of regular garden crazed people come visit your garden, having a gaggle of local garden bloggers visit a week ahead of time could be even more stressful. I know how crazy I get when I have visitors.

I was honored to be invited on the pre-tour and to tour with my fellow blogger peers. We had a great time!

Unlike my little neighborhood in Lents, where most of the lots are 50x100', parts of Beaverton have crazy big lots. These gardens are all little treasures tucked in areas of Beaverton that I would never know were even there. As a resident of outer SE Portland, traveling to Beaverton can almost be like going to Mars, but it was so worth it!

The first garden we visited was the Prewitt Garden (SW Far Vista St.). We met Gordon in the backyard and had a personal tour of the property. They have been working this garden for nearly 40 years. The garden is broken into several areas.


Nearest the house is a covered porch perfect for their fushias, then a lawn area surrounded by perennials, potted plants and several small water features are tucked in here and there. There is a greenhouse for overwintering plants and a potting table.

The area out back is devoted to the veggie garden and several fruit trees along with Gordon's workshop.

I love growing tomatoes, but I bow down to their tomato growing expertise. I believe Gordon said they were growing at least 15 varieties and they were all covered in fruit.


The second stop was the Mitchell Garden (SW Lynnridge Ave.). Christine and James saw us lurking across the street and came out to greet us. 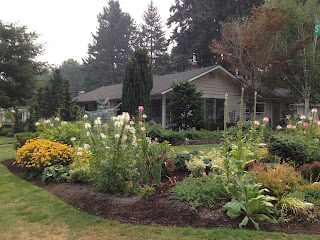 The home had a great expanse of lawn surrounding this corner lot. Perennials and annual flowers graced beds with an amazing mix of conifers. The dark green and chartreuse of many of the conifers mixed with silver perennials moved the eye around the flower beds.

The Cleome have been tenaciously reseeding themselves. Christine edits them out here and there as needed. They are a riot of intriguing height and color.

From the entrance to the backyard, I could tell it was going to be an amazing garden. The backyard was a mix of several sitting areas, woodland-like paths, and even a little agave garden in a sunny hot spot. 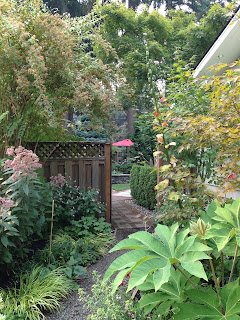 The final garden on our tour was the Winchester Place Garden (SW Winchester Place). Zachary and Leon's garden was a little taste of the south. The front yard was dominated by a large maple and the most unique ground-hugging Japanese maple I had ever seen.


The back yard was a more formal affair with several seating areas, a central fountain and a formal grass "dance floor" with an obelisk as the central focus and Chinese lanterns a festive touch.

They have two cavalier King Charles spaniels that must enjoy this open grass area surrounded by gorgeous pots.

This was just a little snippet of what you will see in these wonderful gardens.

If you have an opportunity to attend the Garden Conservancy Open Day Tour, please do!

This summer, Oregon has broken the record for more days over 90 degrees. It's been darn hot and way too dry all summer. We continue this week with several more days near 100 degrees.

Portland gardener's have had to water like crazy to keep everything alive. Even my huge walnut trees are showing stress. They will be fine. It's the small trees that need constant watering to help them through.

I was even contemplating having an open garden. The grass is spotty, dead, and mostly beige and many of the flowers are past their prime, but I thought what the heck! It would be worth it just for people to see the water lilies.


I do pride myself on my goldfish and water lilies. They are a unique feature of my garden and they make me happy. The water lilies were looking great until about two weeks ago!

Then the raccoons started raiding my ponds. They decided the "Lents Fish Buffet" was open for business.

Most know that raccoons (henceforth referred to as "Lil' F#$%-ers") are nocturnal carnivores and they can be quite a pest in the city, mainly getting into garbage cans, chicken coops and vegetable/fruit gardens.

Each of my smaller "ponds" has a "anti-raccoon prophylactic", which is a ring of rabbit fencing. The ponds are 3 x 40 gallon barrel liners, 5 x 70 gallon water dishes, and 2 x 100 gallon horse troughs. 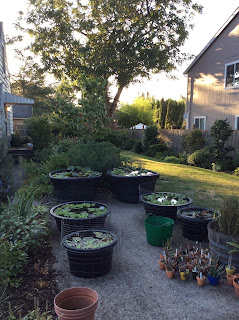 The thought was that the rabbit fencing would keep the raccoons mostly out. The wires are close enough together to prevent their hands from getting too far in and I wrongly thought they wouldn't be able to climb over it.

In the past, over a summer the Lil' F#$%-ers would visit twice a summer. They would make a mess and rip up the water lilies but never actually got in the ponds.


This year the Lil' F#$%-ers seems to be smarter and/or more desperate, I'm sure due to the heat and lack of water and food. They have evaded the anti-racoon protection and actually gotten in the ponds, defoliating lilies and eating all the fish and Japanese snails. They have done this now three times in two weeks.

Last night at 12:30am, I was brushing my teeth in the bathroom and just happened to hear a Lil' F#$%-er trying to raid a pond on the back patio. I heard a loud splash, which was apparently either the raccoon equivalent of the "cannon ball" or perhaps the "nestea plunge". 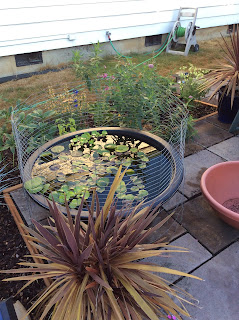 Thankfully I was still dressed as I immediately yelled out the window screen and ran outside. The Lil' F#$%-er knew the jig was up and ran for the hills. Along the way I grabbed the only thing I could find, my 5" spider strainer, I use to scoop crap out of the ponds.

By the time I got back there the marauder was on the fence. It turns out there were actually a pair of them. One ran on the neighbor's shed roof and the other along the fence to the adjacent neighbor's house. It just sat on the fence mocking me and staring me down.

So, in the midst of my "raccoon rage", I grabbed the hose, turned it on full blast and gave the Lil' F#$%-er on the fence a face full of H2O, then the one on the roof got his just desserts.

I'm sure my neighbors were having a "wtf" moment as I was running around like a maniac cursing at raccoons. I was prepared to use my my 5" spider strainer as a ninja throwing star, but my aim is not so good (probably shouldn't have skipped so much gym in high school), so I thought better of actually throwing it.

I had every outdoor motion light and interior house light a-blazing, while I secured the perimeter.

After my raccoon rage simmered down a little, I bunked down in the Shedteau, hoping that if the Lil' F#$%-ers came back I would be right there ready to pounce with my broom and my ninja throwing strainer. 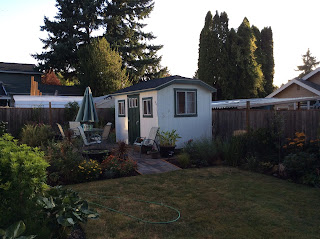 At 3am, my renter got up for work and all the lights in the house were on. I'm sure he thought "Mrs. Roper" finally went off the deep end.

I finally got into my own bed, the one actually in the house, at 3:15am and I think I slept until 6am. Every little noise waking me up. I barely slept.

Boy, I'm pooped... Sorry job, I'm too tired to work at work today. I think I need a nap today for lunch.

On the way home today, I will be stopping at Home Depot for more wire. I'm going to make lids for the raccoon condoms. I'm also stopping at the fabric/craft store for bells to hang off the wire. The bells will wake me right away and announce the Lil' F#$%-ers have come for another visit.

Upon hearing this story, a friend remarked that "crazy is essential when protecting something you love."

So let's get crazy! Perhaps the bat shit kind?!?