The Road to Open Garden Day!

May 6th was the first time my garden has been open to all HPSO members.

While at first I thought it was going to be a scary prospect, ultimately it was a very enjoyable and positive experience.

There were however, a few things on the road to May 6th that made me second guess the decision to open my garden. 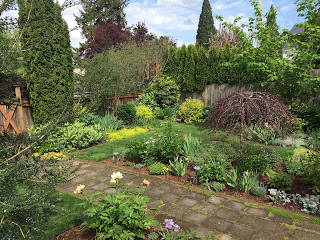 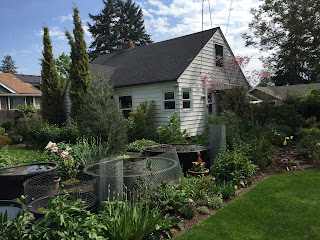 In April, I thought it would be a good idea to have the lawn aerated. It seemed like there was enough time for all the plugs to break up before people saw the lawn. After aeration, it looked as though 10,000 chihuahua's visited my grass and left "deposits".

Then it rained for weeks...or so it seemed. When it rains here it always seems like an eternity.

The dirt plugs all got smashed into the lawn and started creating "holes." I spent a few days obsessively raking and crawling around the lawn trying to break up the plugs and loosen the grass.

I swore to never aerate again before anybody came to visit. Alan (The Mardi Gras Gardener) thought I was a nut case, because I was worried about all the bare spots only my eyes could see.


I also had to dig a few new garden areas for new flower beds this spring. Which required new plants to be bought, a pine tree to be moved and more bark mulch purchased and spread. Thankfully I moved the tree, did all the digging and the installation of the lawn edging months ago, so I didn't have to stress out over it.

At our annual trip to Adelman's in April, I authorized "the backhand smack", so that if I got too peony crazed, Anita (my more reasonable and trusted plant buying companion) could give me a whack to the noggin and tell me no!

Before the trip, I had clearly said that I only had room for three peonies, but four would be the maximum. I, for whatever reason, showed almost superhuman restraint and only came home with four new peonies this year. Surely there is some sort of reward for this I should graciously accept?!?


I also had to be sure the little vegetable garden was in. My Lents Farmer name came from the big vegetable garden I no longer have, so the little veggie patch at least had to be in. At least one visitor asked about my "farming" qualifications, to which I said "I'm from Wisconsin and once lived on a dairy farm." I didn't actually have anything to do with the farm, but I did indeed live there. So that counts!


Most of the tree peonies I wanted everyone to see, all bloomed the week before. The few days of hot weather spurred them into opening quickly. By the day of the open garden there were just a few left, held together with bubblegum and scotch tape. I left the flowers in their sad state. At least a flower on the verge is better than no flower at all. Well, that's how I saw it at least. At one point I heard Alan laughing in another room because he was looking out the window watching the last petals of a peony flower drop off. Such is life!

The morning of the open garden, while lazing in my bathrobe with my coffee, it started to rain around 9am. As is just my luck, I thought the entire day was going to be ruined. Alan kept telling me it was going to stop.

It rained for ten minutes and then all was right with the world. The sun came out, we got everything arranged and were ready to go!

I'm not proud of this, but I have to admit to verbally abusing some bearded Iris buds that were soooo close to opening and yet would not cooperate for my garden visitors. Irises are sometimes jerks...

Nature's last little jab at my side was that after the rain stopped and the sun came out that morning, my English walnut tree decided to drop all it's catkins all over everyone's head with the slightest little breeze. At first I tried to pick them up off the hole-riddled grass, but it was a battle I was not going to win. 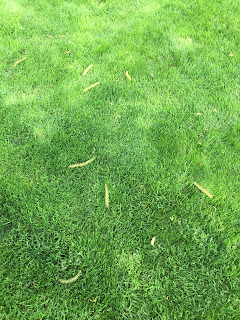 All the HPSO members that came were lovely, and I felt right at home chatting with them and pointing out the plant and flower highlights that day.

The most asked about plants were oddly enough the Bastard Balm (Melittis melissophyllum 'Royal Velvet Distinction') and the little Embothrium coccineum (Chilean Fire Tree) which was just coming into bloom.


The time went so quickly and I was surprised how tired I felt after, but I had been standing or walking for 6 hours. I won't wear flip flops next time and I will be sure to remember to apply sunscreen!

The next open garden is May 20th and I'm really looking forward to it!  Hope you can make it! 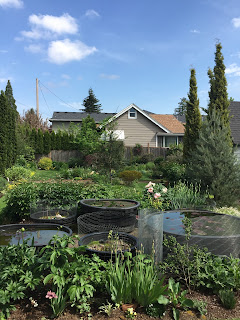