With the removal of my big veggie garden this year and the patio replacing it, it was also time for a new garden shed. The old rusted aluminum shed needed to go. It was looking pretty bad.

One rainy Sunday morning, with the help of some friends and a few loud "hulk smashes", the old shed was a goner.
What I discovered emptying and removing the old shed was that I didn't really have all that much garden stuff and some of the stuff that I did have, I really didn't need. The mower and gas can still needs a home however, but I will figure that out later.

I opted for a pre-fab 8'x12' shed made by a local company. I went to their lot and looked around one rainy day and then went to their showroom later on to talk with a sales person. I basically knew the features I wanted before I purchased and opted for the 12-months same as cash deal.

I added some extra features to the shed, nice windows, one wall with five little transom lights, and a roof with a different style (which made installing the wood inside a pain in the a$$).

It only took a few weeks for them to pre-fab it and then they pulled up in their truck on the scheduled day and installed it in one day.
After spending some time inside the empty shed, mostly sitting on the plywood floor daydreaming, I decided that what I really needed was a "man-shed" or as we decided to call it - a "shedteau" (like a château, but really a shed, get it?!?). My personal Chenonceau.

It would be my garden oasis to hang out in and get away. A place for a Sunday nap after hanging out in the sun on the patio.

I did some more thinking about the interior and the feel of it. I decided that I also wanted to insulate and enclose the walls with either drywall, paneling or wood, but I wasn't sure what exactly just yet.

Tools are basically unknown to me, so it had to be something I could actually do or do with the help of a friend. My friend James volunteered to help do it.

We took some exploratory trips to my local big box hardware stores to look at paneling and wall board. I decided on tongue and grove pine. It was fairly inexpensive, but would give the shedteau a nice mini cabin look and feel. 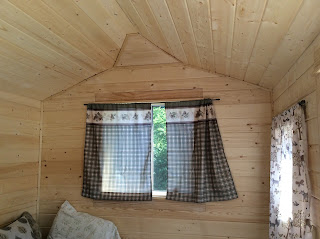 I borrowed some basic tools (two kinds of saws, a compressor, a nail gun, etc.) from some coworkers and we started buying wood. We had to hand select all the boards. It was sometimes hard for the two of us to always agree on a particular board. It took probably nine more trips to the store before we got everything.

It took us about two and a half weeks to finish the inside. We had some really hot sunny weather that made it impossible to work as it was just too hot. My volunteer labor went on strike basically!

But we finally managed to get it all done.

I still have some decorating to do, but I think it turned out great for someone who's never done a project like this before.

Now I can sit in the shedteau and watch netflix movies on my iPad or take a well deserved nap. I even slept for a week in the shedteau, when relatives visited and took my bedroom. 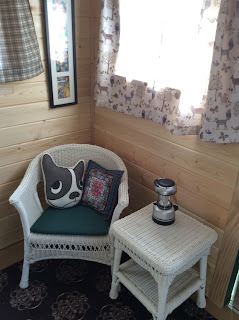