State of the Garden - April Addition

It's the beginning of April and a lot is popping up in the garden. It's been rainy and on the cold side which sometimes makes being outside a little bit of a bummer. There have been a few glimmers of sun and warmth.

I'm lucky to still be working during this odd time in our history. I still haul my keister to work everyday, while the rest of the staff "works from home"...

It appears that this year I'm gardening just for me, for my sanity, health and well-being. And I'm okay with that. While I enjoy the smell of dirt and lilies, I don't want to do it from inside a box. So solitary gardening it is for the time being!

Some of the predictions from my last blog post are clearly out the window.


When I'm home, since I can't do anything, go anywhere, and all the spring gardening events are cancelled, my garden is looking pretty good.

My three HPSO open gardens are scheduled for May and June, but it seems unlikely they will happen.

My fledgling assistant Cosette is still pretty much a failure at gardening, but has at least learned to stay out of the flowerbeds - mostly. Her constant running of the side lawn at top speed to fetch her ball has really helped with lawn aeration. My grass lawn looks the best it's ever looked!

The peonies will be spectacular this year. I already feel for my poor FB and Instagram friends that will have to deal with the onslaught of flower pictures and my selfies with peonies. 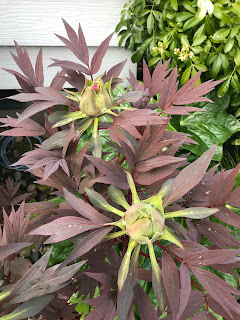 Before all the craziness happened, I managed to bring home ten roses. My last post predicted I'd end up with three roses! A sane person might ask what the hell I was doing coming home with ten roses, but you know...it happens. It wasn't all at once. It took three different trips to the nursery. I know I had "Grandma D's" blessing.

Alan gave me a David Austin rose for Christmas, well the catalog actually. I got to pick one out. My mother, who visited for Christmas, and I both read that catalog from cover to cover several times. I had about eight roses picked as potential options.

As it turns out, Alan and I were both at Portland Nursery when the roses came in and I/we picked out a Weeks rose named "Koko Loko", which was fitting as that's one of assistant Cosette's nicknames.

It's an exotic tan with mauve edge flowered rose that fades to lavender. I'm very much looking forward to seeing it bloom. The rest of the roses were a mixture of David Austin roses and a couple random roses that struck my fancy.
I gave up what was left of the vegetable patch for many the roses. The past few years have been bad for tomatoes between blossom end rot and the rats eating them. The Lents Farmer is no longer in the vegetable business. My boss will just have to buy her own tomatoes.


The trillium, daffodils, primrose, hyacinth, early iris are all up and doing their thing. I've been looking out for the terrestrial orchids, paris and random bulbs to pop up. I'm never happy until all my old plant friends are present and accounted for.

There are a lot of plants that would normally die, but the past winter was so mild, they are doing just fine. Many are getting cut back or haircuts.

I'm still working on my fall clean up and weeding here and there in the flower beds.

I recently removed the big Yucca that was one of the original plants in the yard when I bought the house. It was getting too shaded and floppy and was just not attractive. I actually broke the shovel trying to get it out. I resorted to sawing out most of the trunks. I'll have to get a new shovel at some point.
I think some of the smaller ponds will go away this year. I've been growing waterlilies for more than a decade and they are becoming a lot of work I don't want to do any more. I will keep the larger 300 gallon ponds though. Deciding which lilies to keep will be hard.

The bogs still hold my attention and I would like to focus on growing more bog orchids.

When we can all get together again safely - let's party like it's 1999!